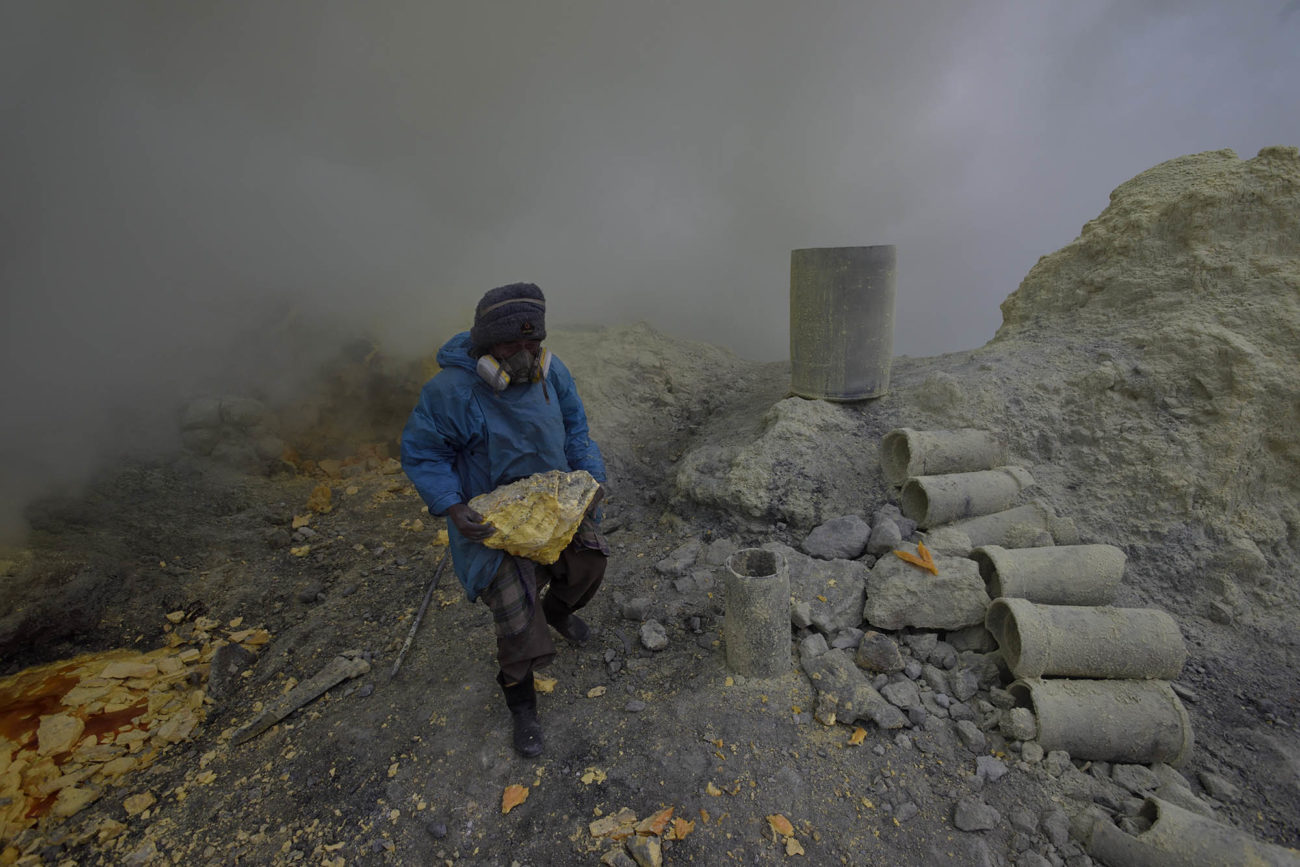 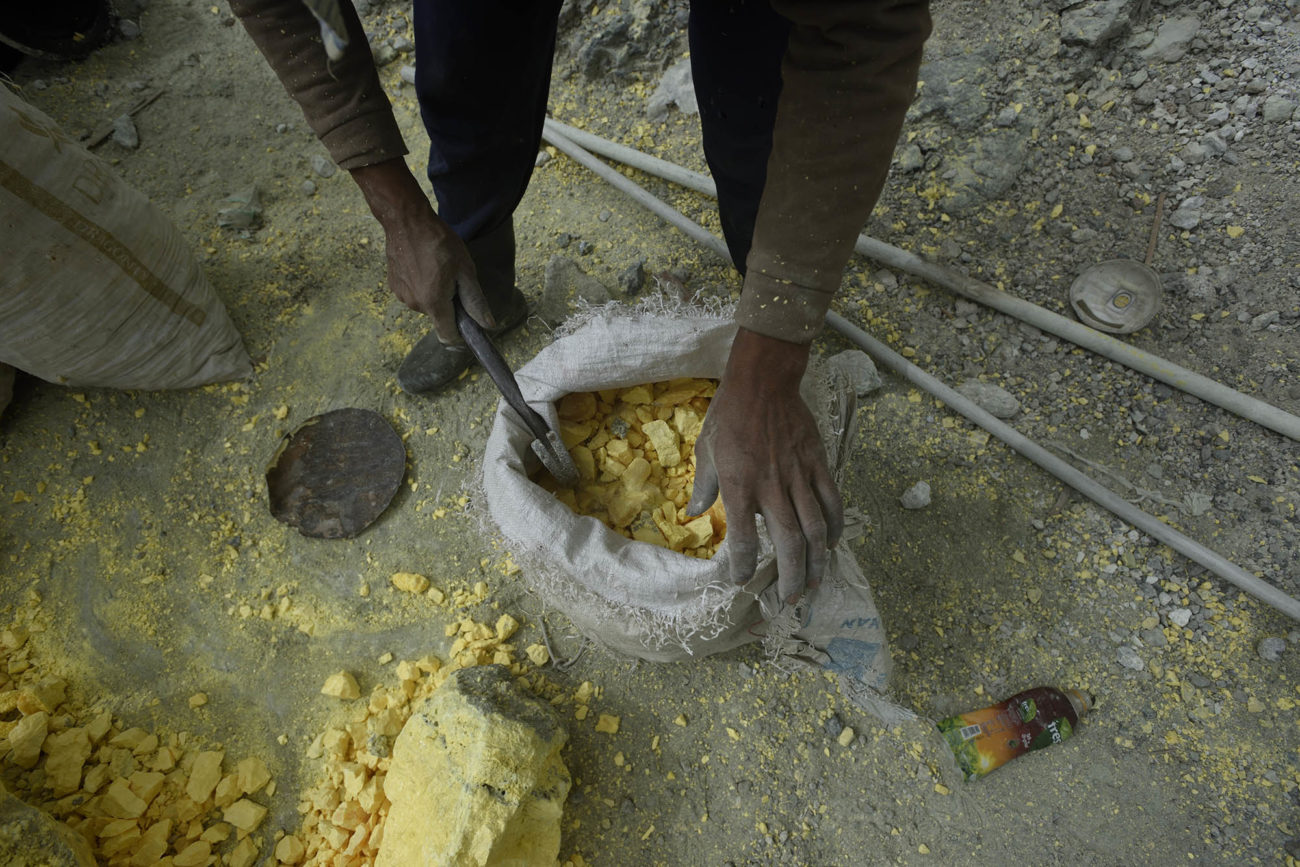 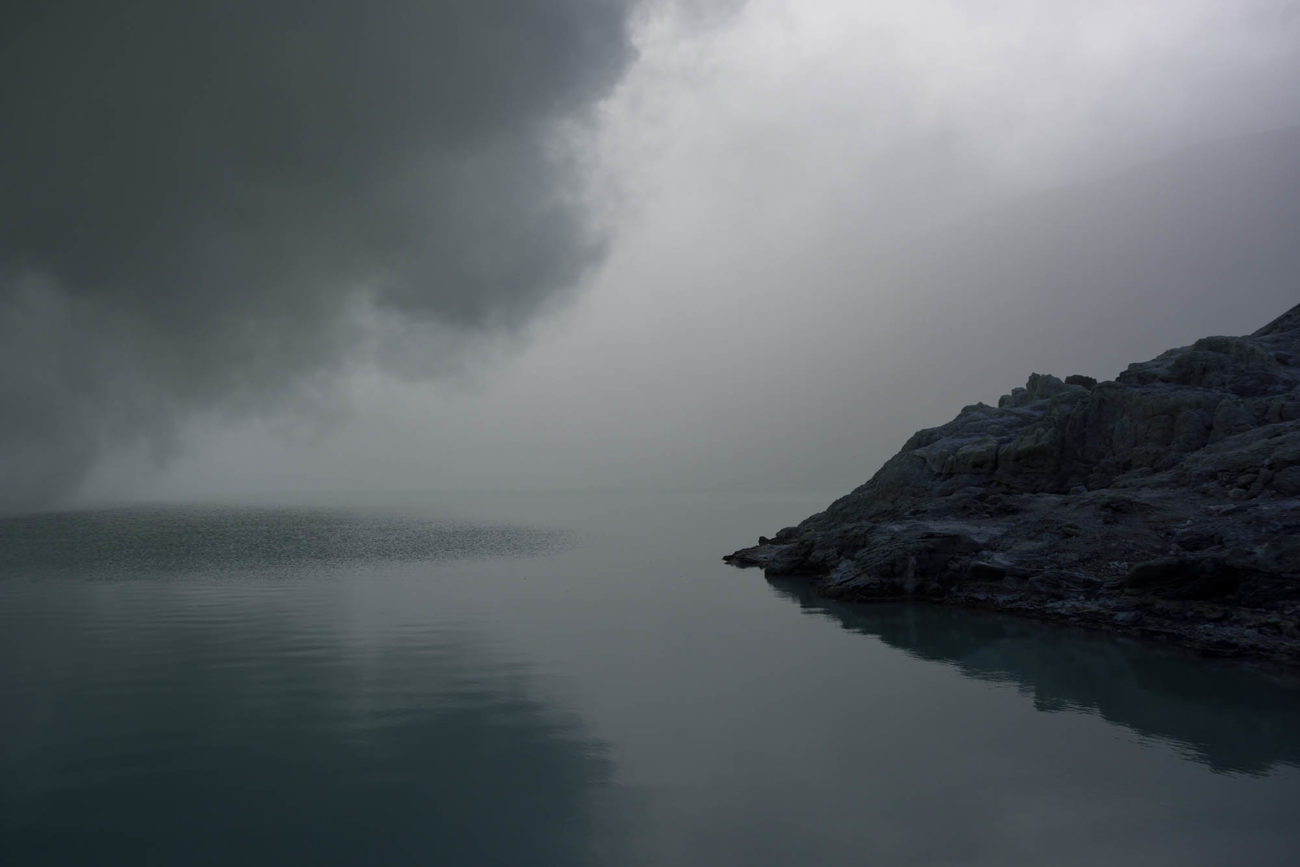 Steam is pouring out of the tea kettle next to a group of wealthy Chinese tourists, dressed up with hats and jackets, cuddling up in the cold fog that is covering the foot of the Kawah Ijen volcano in east Java, Indonesia, like a quilt. Kawah Ijen is one of the 130 active volcanoes on the Indonesian island and is located in the most seismically active region in the world – The Ring of Fire. People from all corners of the world are waiting for the gate to open so they can walk up at the 2,799 meter top and look down in its crater to see the blue fire, which has been attracting the attention of researchers and travelers for more than two hundred years now. Among the hundreds of tourists there are about 40 miners, also waiting for the gate to open so they can start with their daily work.

"Working in Kawah Ijen quickly tears the workers’ bodies, worn out their knees and deforms their backs"

Sulfur mining began in 1968 in Kawah Ijen and is still the only manually operated sulfur mine in the world. It has long been called the world’s most devastating job, because many of its workers die before reaching the age of 40. Sulfur is used to bleach sugar, make matches, soap, fertilizer and vulcanized rubber, both by domestic and international factories.

It’s 2 o’clock in the morning and the gate to the volcano opens. Tourists start the 6 km walk along with the miners starting their shift. The miners’ small trolleys which they use to load sulfur, have been converted into manually- drawn cabs for the steep slopes of Kawah Ijen. 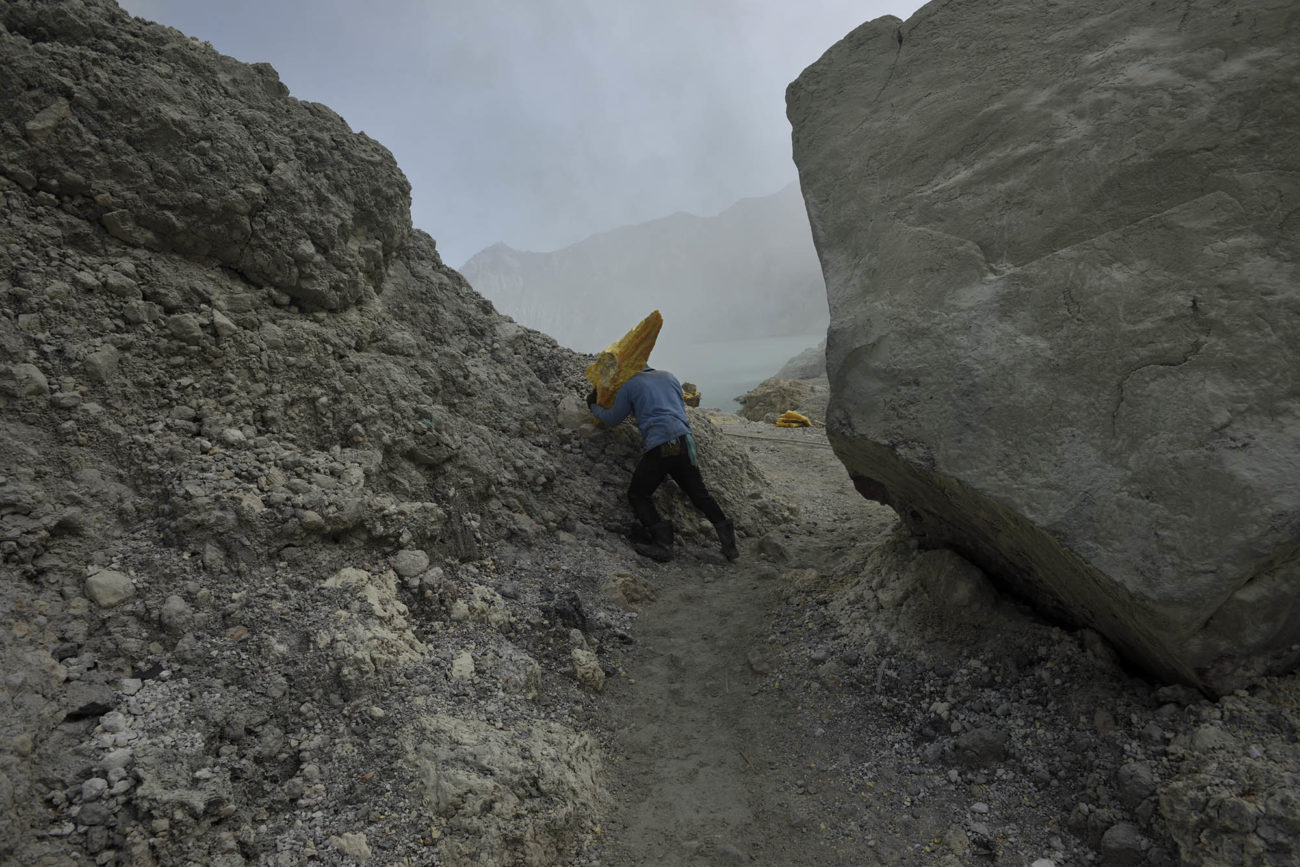 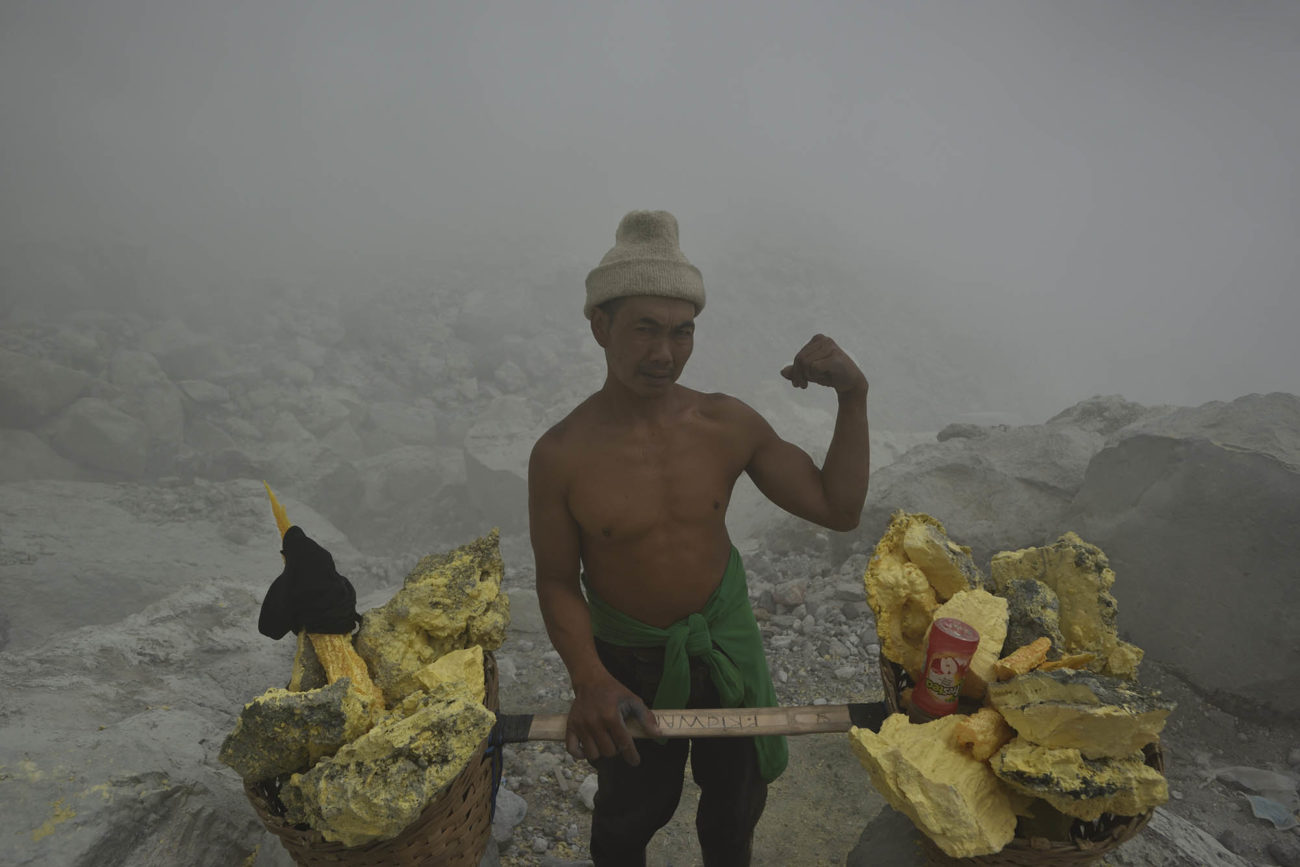 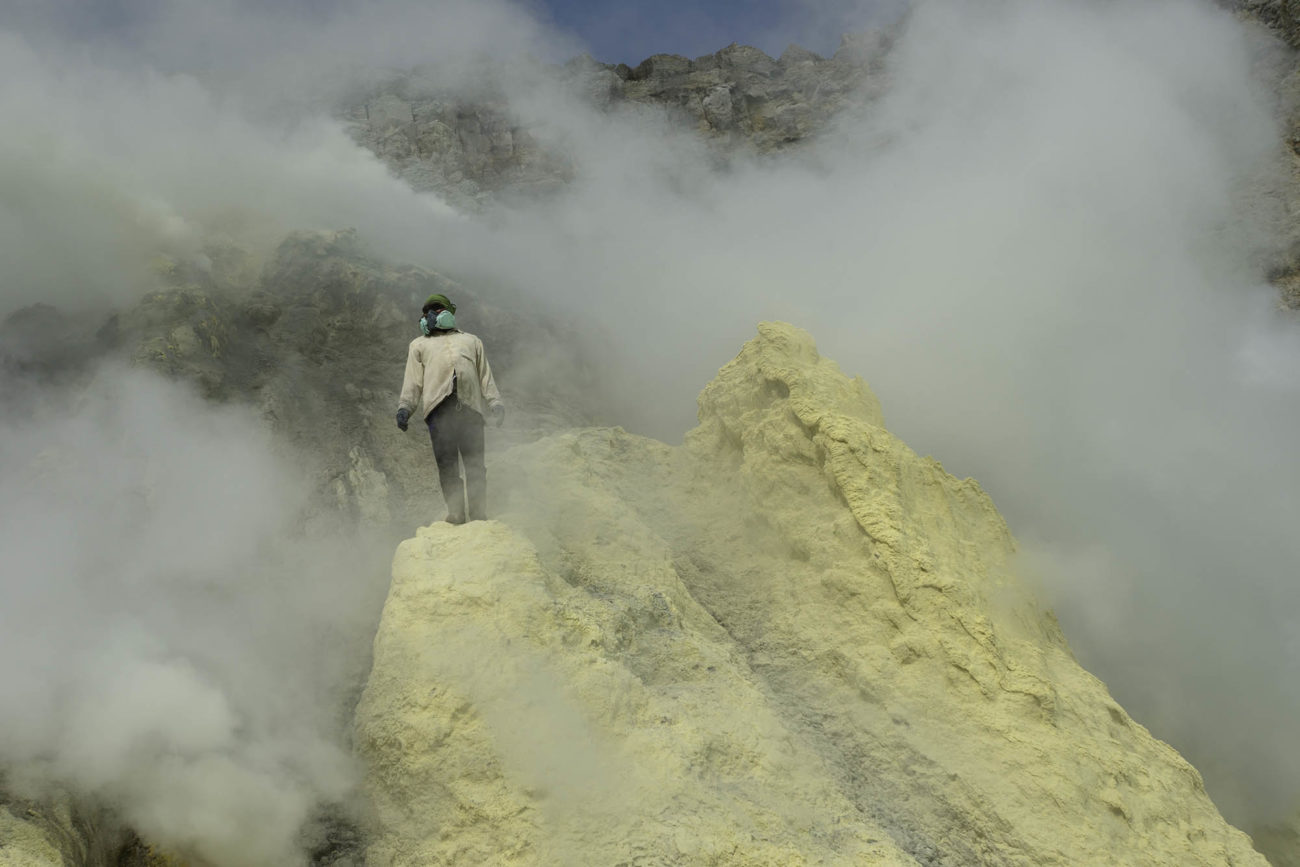 – Taxi, Taxi, shouts a miner to a bunch of tourists struggling up the path to the volcano.

Even a km up the volcano’s foot, one can already smell the reek of sulfur, some miners rent out their gas masks for a few dollars, which obviously results in the miners being left without masks.

It takes about an hour to get up on the crater. In the still star-filled black sky one can see a column of headlamps struggling along the narrow path up. Handwritten signs warn against going down the crater because of volcanic eruptionsand falling rocks.

Up on the crater the sulfur fumes stick in one’s nose, some of the tourists are more sensitive than others and cough and rub their eyes. For the miners, this is the loading site and the number of times he can go up and down the crater determine the worker’s day-to-day earnings. A miner earns 800 Indonesian rupees per kilo for the first round and 900 Indonesian rupees for the second. The low kilo price means that the workers try to carry as much sulfur as they can in baskets, or in large containers on their backs. A load of 70-80 kilos is not uncommon and it brings the worker about 5-6 US dollars, so if the miners are able to go twice, they can earn around 10-12 dollars per day. Working in Kawah Ijen quickly tears the workers’ bodies, worn out their knees and deforms their backs, which is why older miners are often content with less than half of the load the younger ones carry, which directly affects their earnings.

Down in the crater, tourists gather around the blue fire, which can only be seen at night, caused by burning sulfur dioxide. Some tourists take “selfies” with the miners, others are pushing to get as close to the blue fire as possible. At the bottom of the crater there is a nearly two-kilometer-long turquoise lake that illuminates beautifully in the dark. The lake has a pH that is lower than that of battery acid and is strong enough to dissolve metal. It is the world’s largest acid lake. Volcanoes are generally described in holy writings as hell and therefore the yellow sulfur has been called the Devil’s gold. 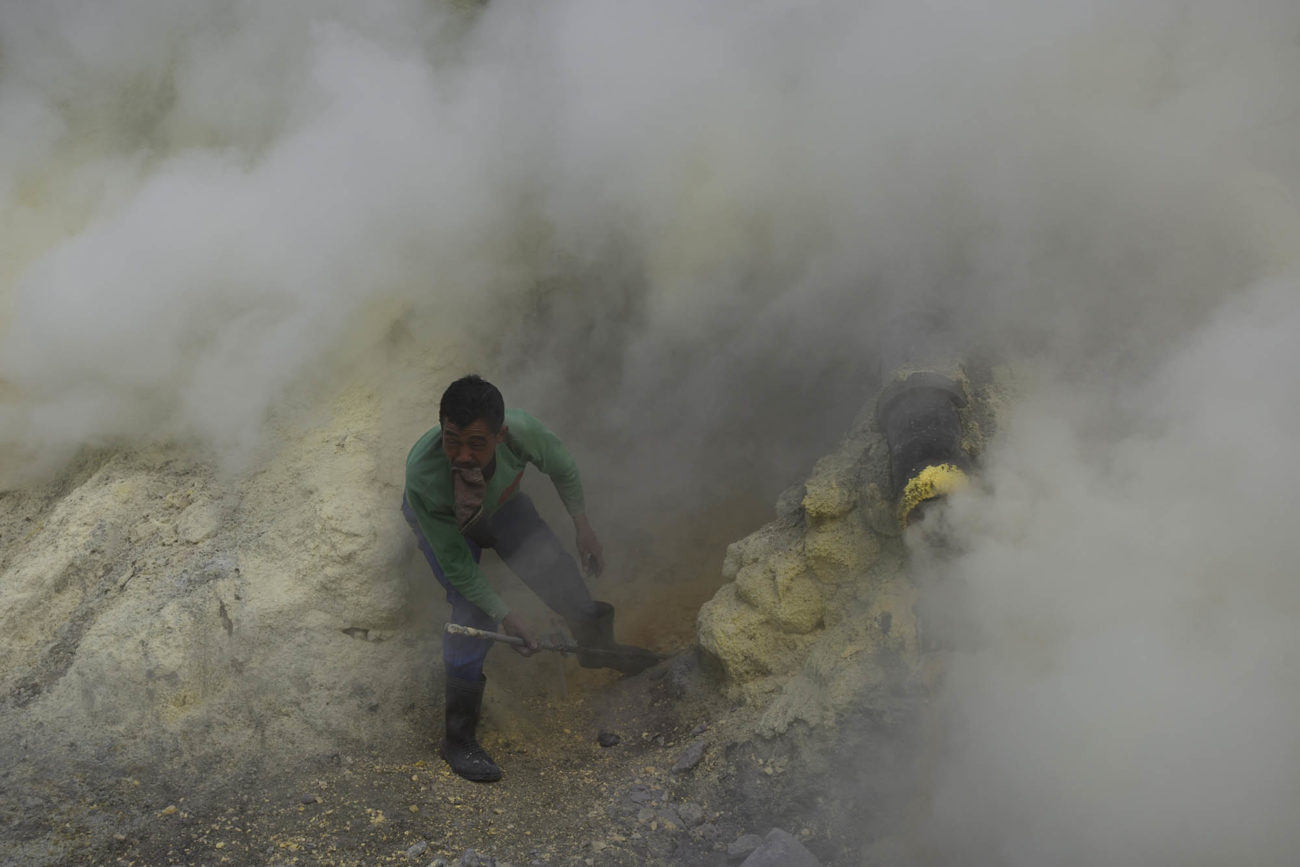 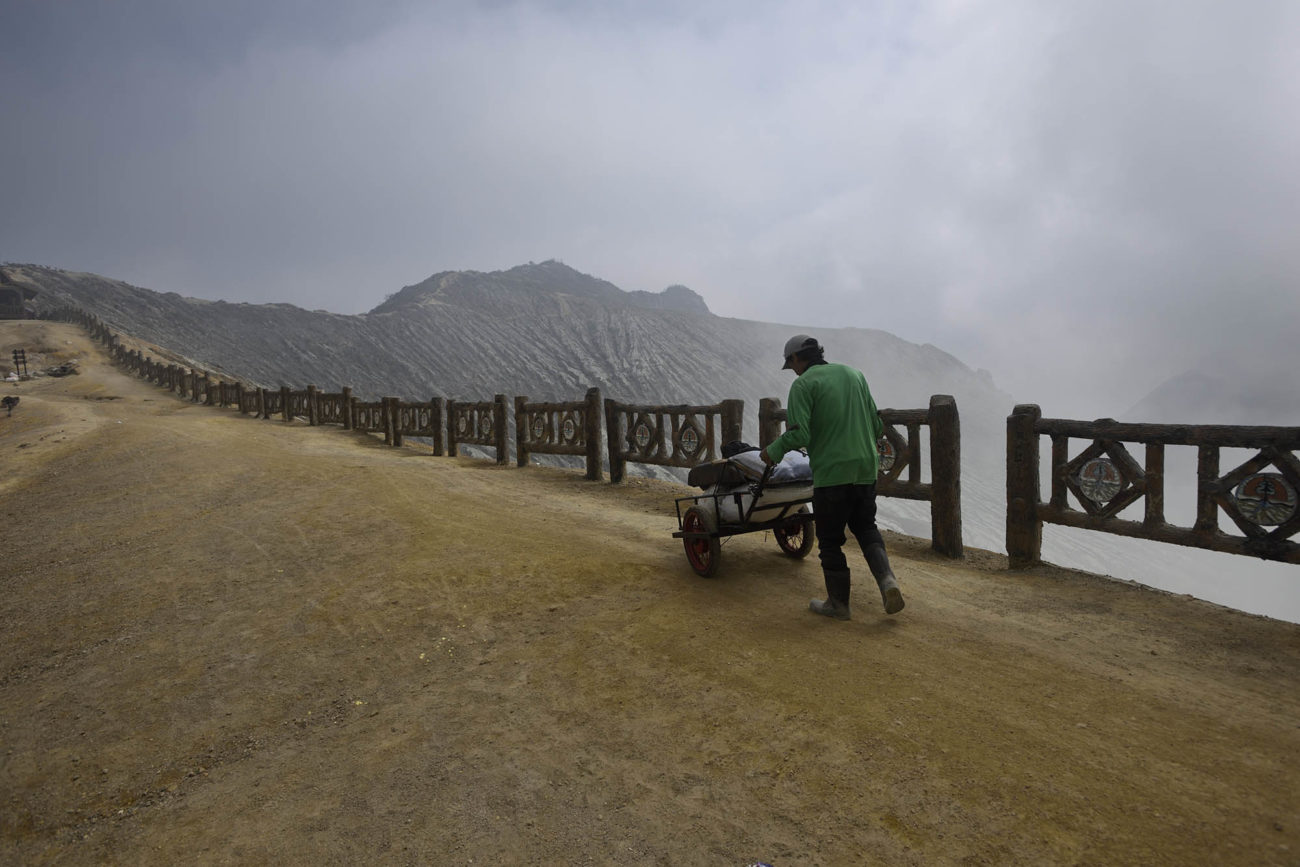 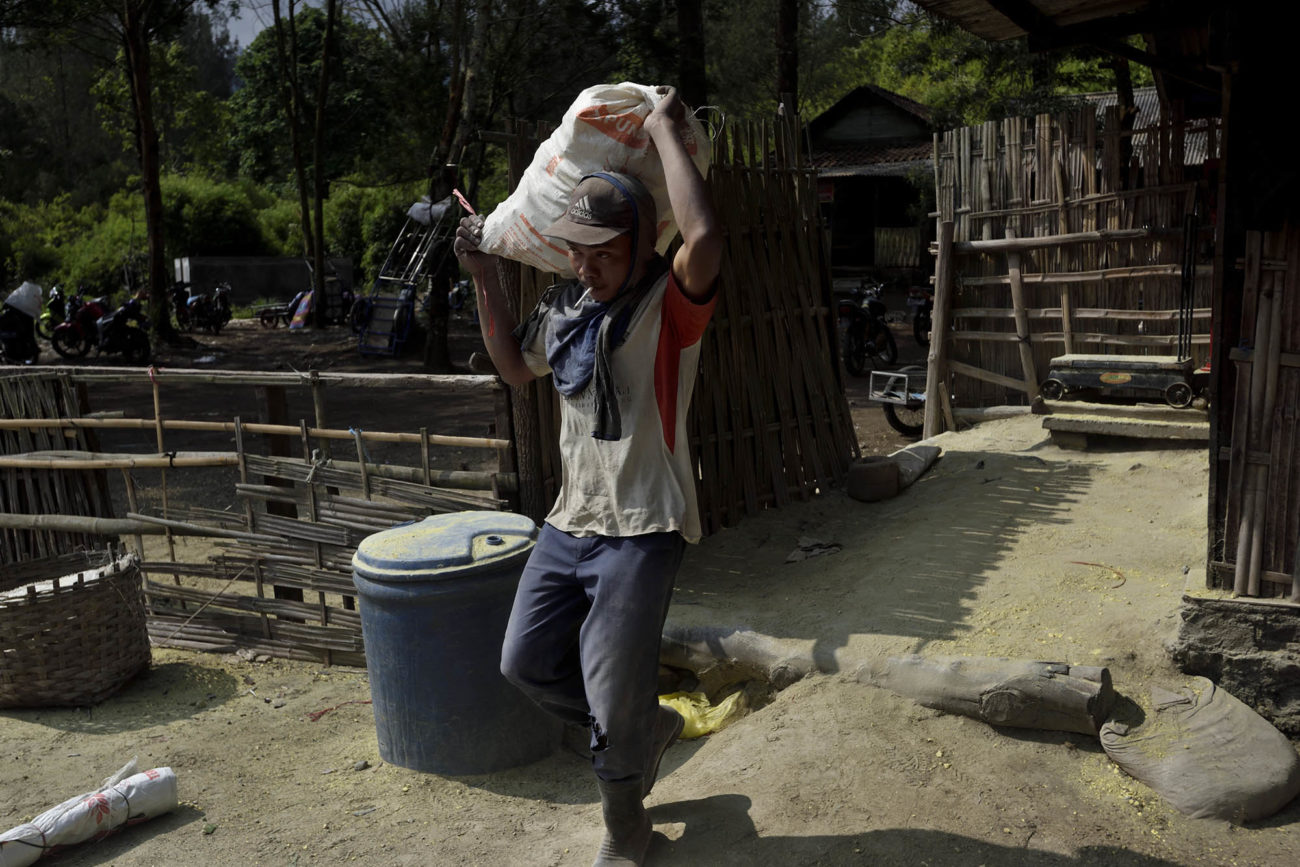 At the bottom of the crater there is a nearly two-kilometer-long turquoise lake that illuminates beautifully in the dark. The lake has a pH that is lower than that of battery acid and is strong enough to dissolve metal. It is the world’s largest acid lake. Volcanoes are generally described in holy writings as hell and therefore the yellow sulfur has been called the Devil’s gold.

When the sunrise comes, the tourists leave the crater and there are only miners left at the Kawah Ijen volcano.

“It is hard work but I get paid every day, unlike working at home in the village”, says Budiono, 24-years-old.

The mining companies have installed ceramic pipes from the southeastern part of the crater, which allows them to channel the sulfur vapors that condensate almost immediately into liquid sulfur, which then drops and solidifies into sulfur clumps collected by the miners. Many of the workers lack any vital protective equipment, such as gas masks, and are instead relying on a piece of cloth on their mouths. This has resulted in numerous fatal accidents since mining started in Kawah Ijen. Constant cough attacks, followed by runny noses and eyes – this is the everyday reality of the workers in the crater. The toxic gases around the crater consist of concentrated sulfur dioxide and hydrogen sulfide gases, measuring 40 times higher than the values considered acceptable for humans. The miners risk irreparable damage to their lungs and reproductive system, and the continuous exposure causes the miners’ teeth to slowly dissolve.

In a profession where young men age very quickly, the 72-year-old Papa Angus is some kind of a phenomenon. Statistically, he should have been put in a grave a long time ago, but down the crater he struggles with large blocks of sulfur.

“Papa Angus is strong,” he says grinning, while smoking a cigarette a few meters from the sulfur vapors.

Papa Angus is a bit of a star down the crater and has been interviewed by a number of television stations from around the world. But Papa Angus’ knees are worn out and he constantly coughs.

“Papa Angus will soon be finished,” he says with a teardrop of sincerity.

Hariyono, 30 years old, has worked in Kawah Ijen for 9 years. Despite the hard work, Hariyono has a positive attitude towards life and work.

-In Kawah Ijen I meet people from all over the world, down the volcano I learned English, he says.

In the middle of the day most of the miners are already on their second round in the crater. Papa Angus is still struggling with his first one. Around 2 pm in the afternoon, most of them have completed a 12-hour work day.

It is hot in the crater and the sun is high and the sulfur vapors are thick like cumulus clouds falling down from above. Small figures are climbing slowly up the steep crater, carrying shining yellow sulfur on their backs. Hell? Maybe it’s not that far away…