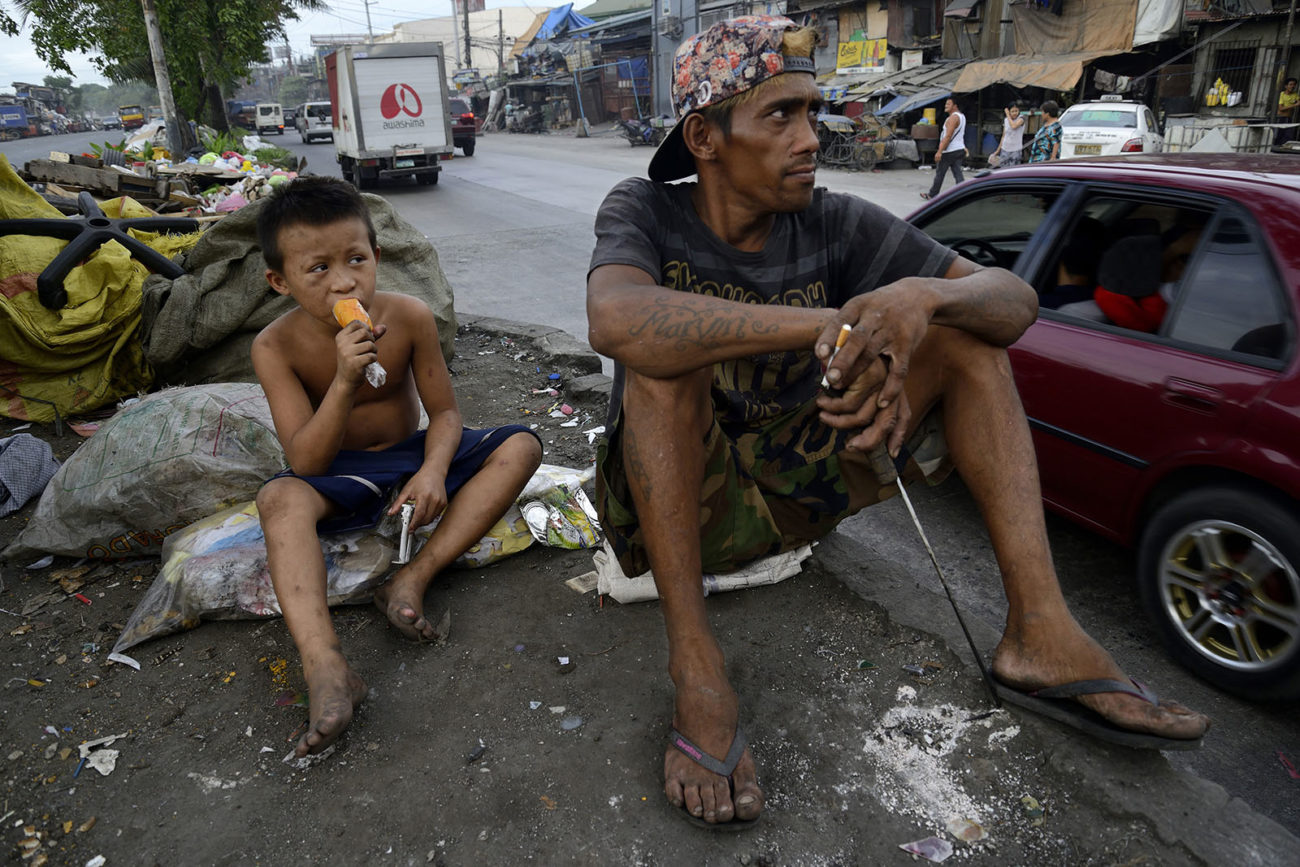 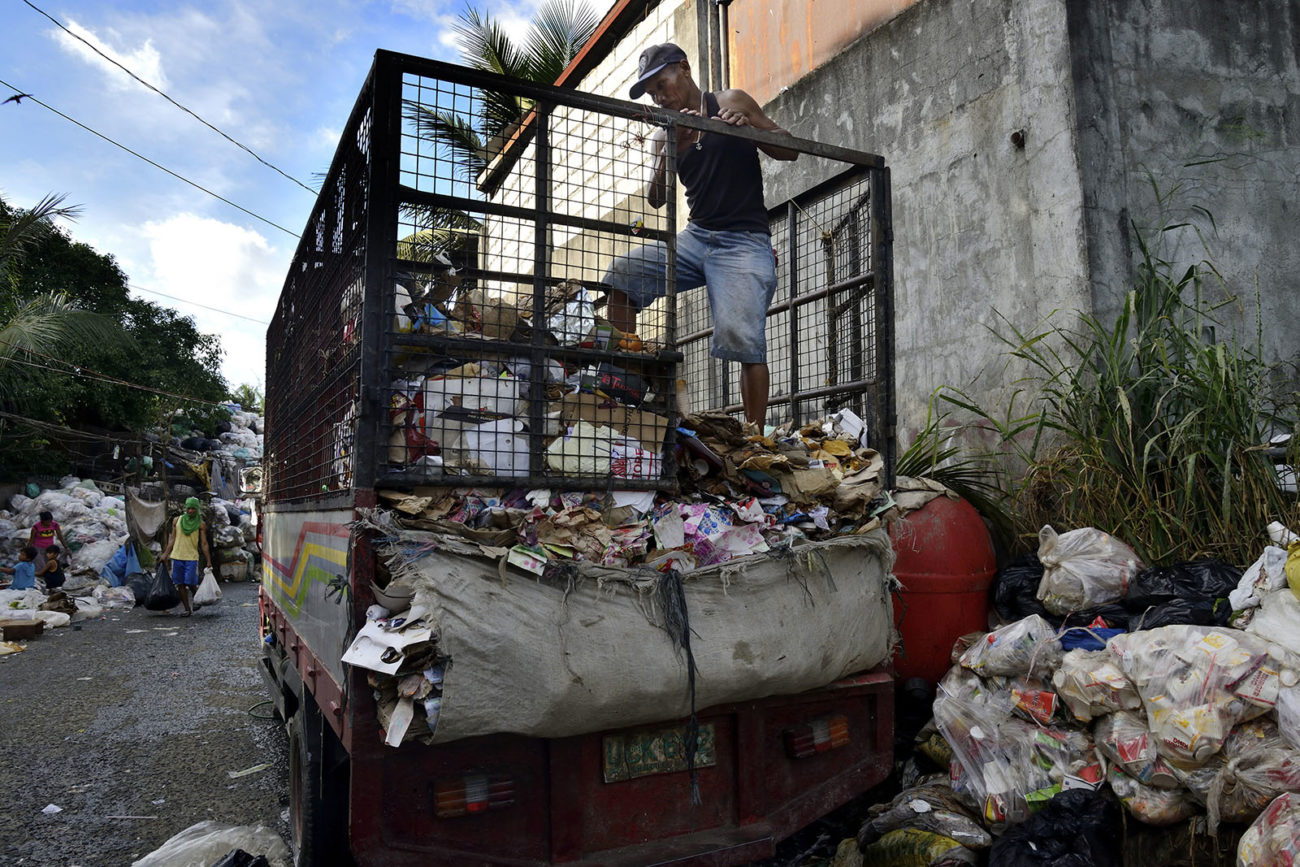 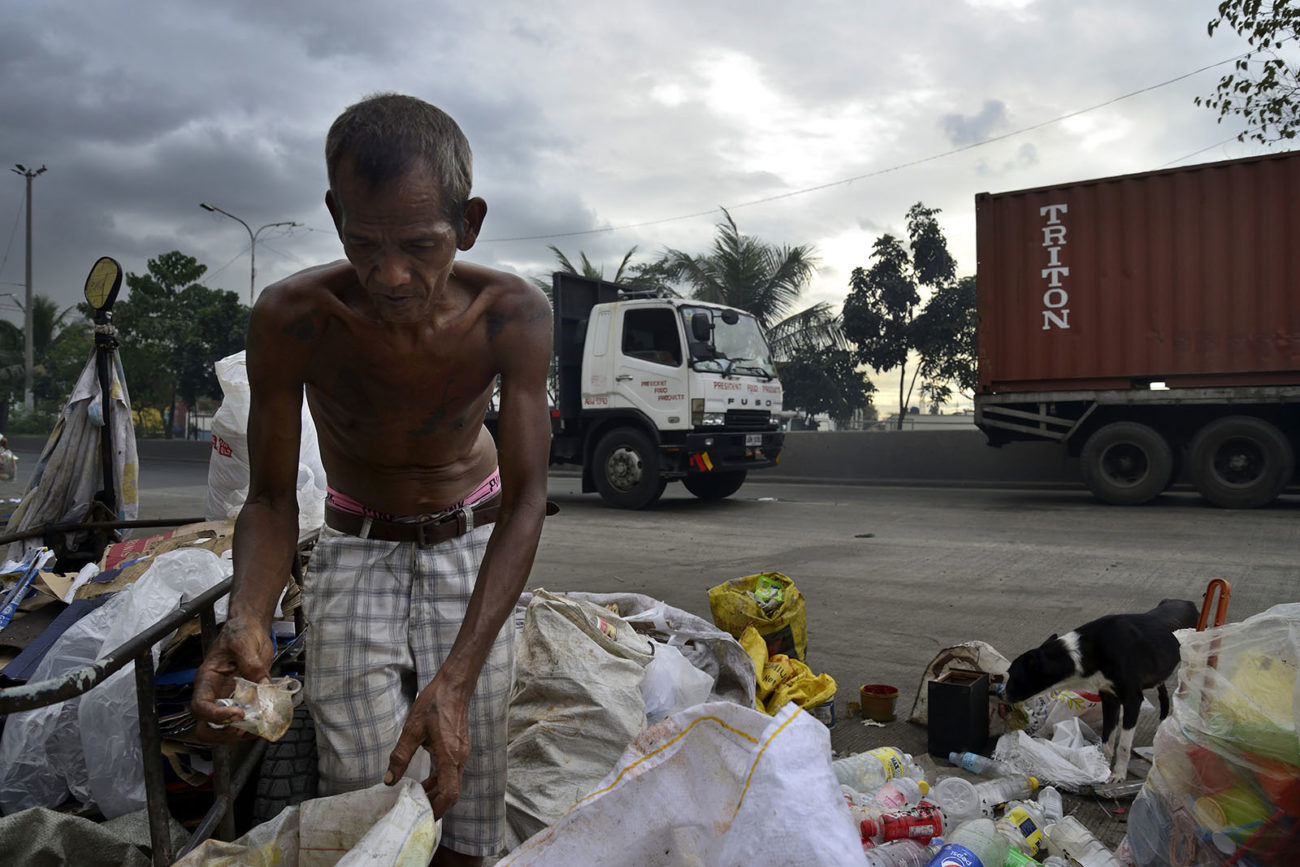 Road 10 stretches along the coastline next to shanty towns in the underdeveloped Tondo district of Manila. On the heavily trafficked road, everything passes from trucks, vans to tricycles. The big SUVs that pass have their black-tinted windows closed and the doors locked, due to all the hungry stomachs and long arms that snatches everything of values next to the stop lights. The contaminating Manila Bay contributes an extremely bad smell, but it is burnt garbage, rotten food, diesel exhaust and a non-functioning sewage system that makes the odor almost unbearable. Most people in Tondo live far below the level considered to be poverty by the Philippine government and many of the residents live by sorting the garbage from Metro Manila, so called scavengers.

"The Philippines is the third largest contributor of plastic waste in the sea after China and Indonesia."

Marvin has worked as a Scavenger for several years in a lack of other work, and now he is digging through the garbage he finds on the road 10 with his son.

– I found a necklace once, a silver heart. I sold the necklace, but gave the heart to my girlfriend, Marvin says.

This part of Tondo, is not only filled with garbage disposal but is also a vulnerable area with drugs and crime. Many so-called vigilante murders, accused drug dealers and drug users have been dumped along road 10 since the drug war began.

Before the scavengers were viewed as being part of a dangerous gray economy, but today they are considered as an organized force, integrated into the recycling chain and contributing with the waste disposal. They divide plastic packaging, various metals and so on. Right now, there are thousands of scavengers in Metro Manila and the garbage generate millions of dollars. It is a complex system where those who purchase the garbage specialize in selected products such as plastic bottles, cartons, copper wire, aluminum, glass, broken toys and machines. Scavengers earn an average of 100 pesos to 300 pesos ($ 1.99 to $ 5.96) per day, which is below the minimum wage in Manila. 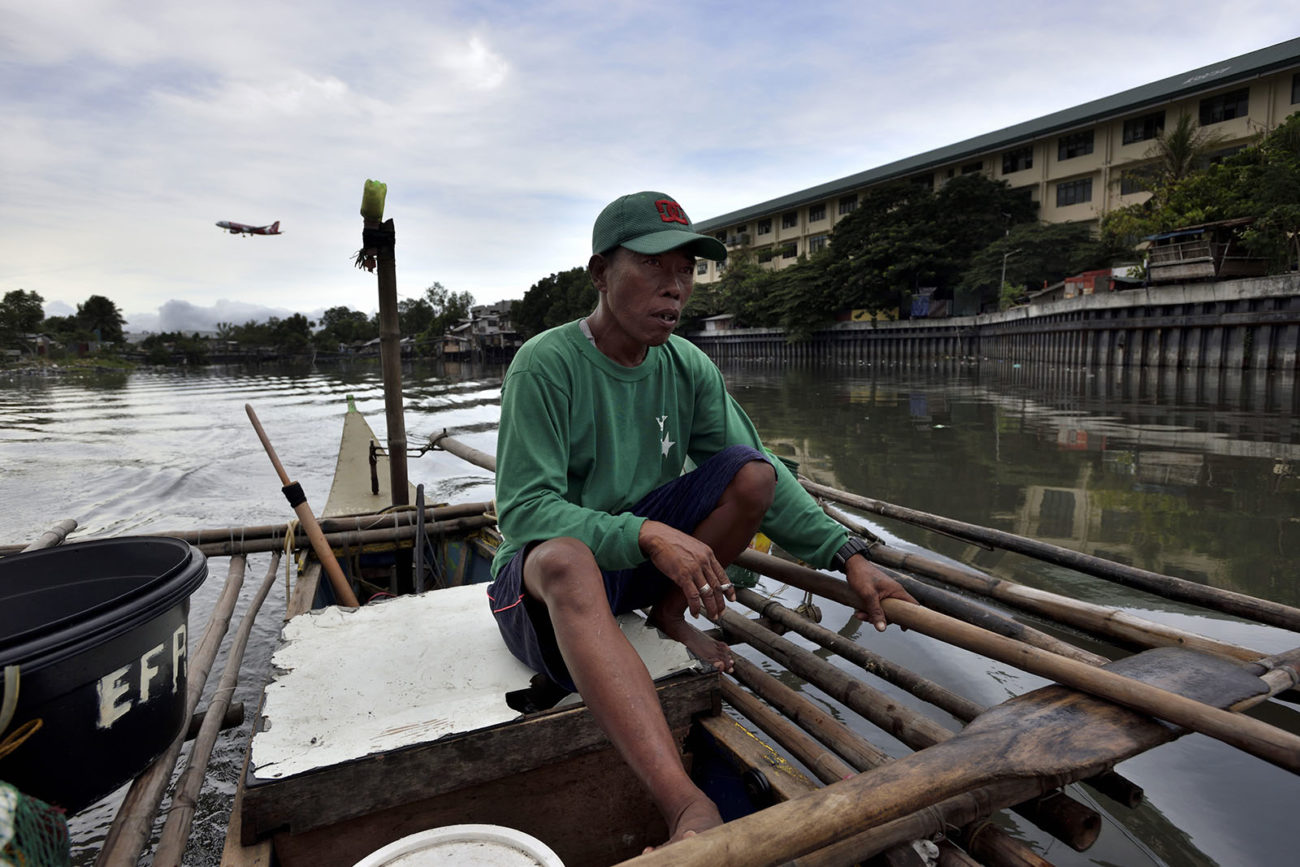 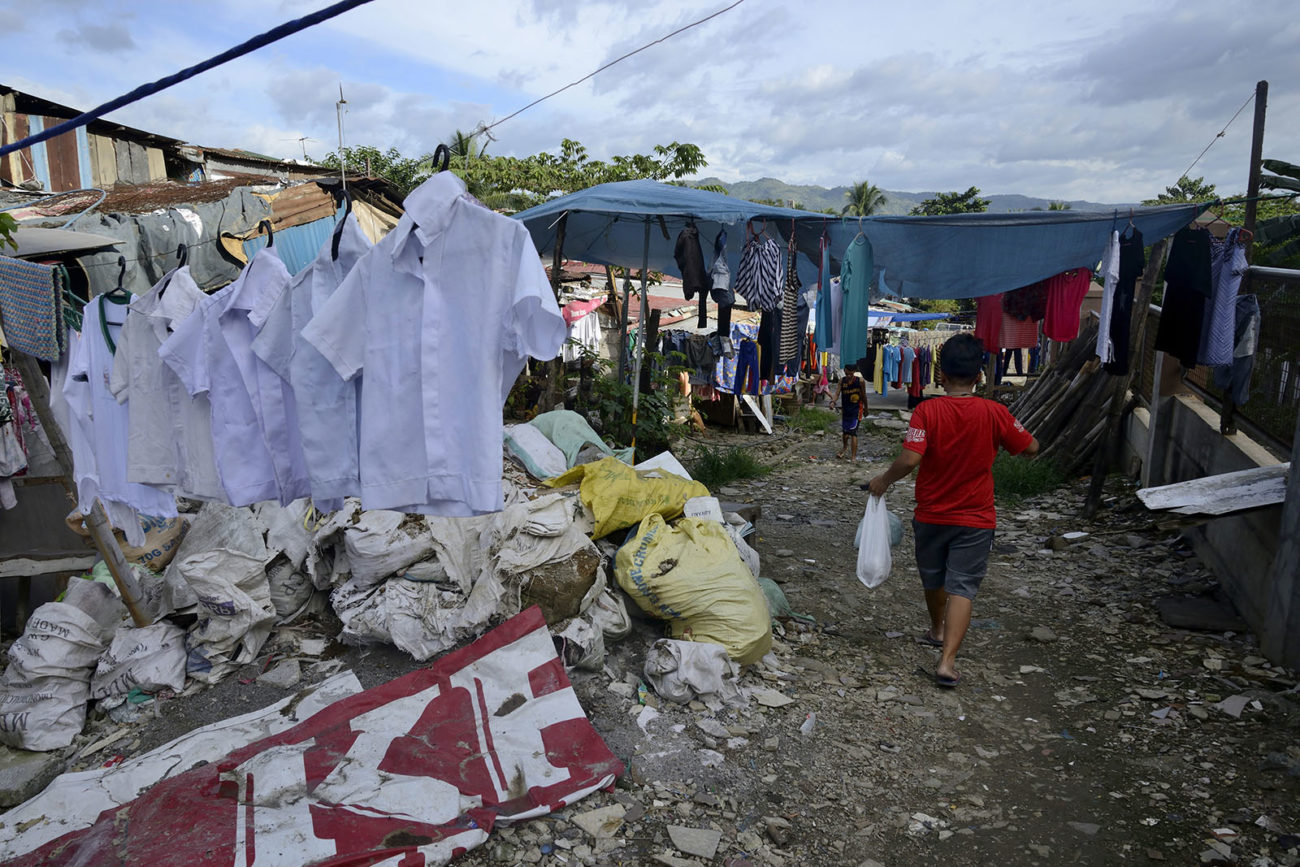 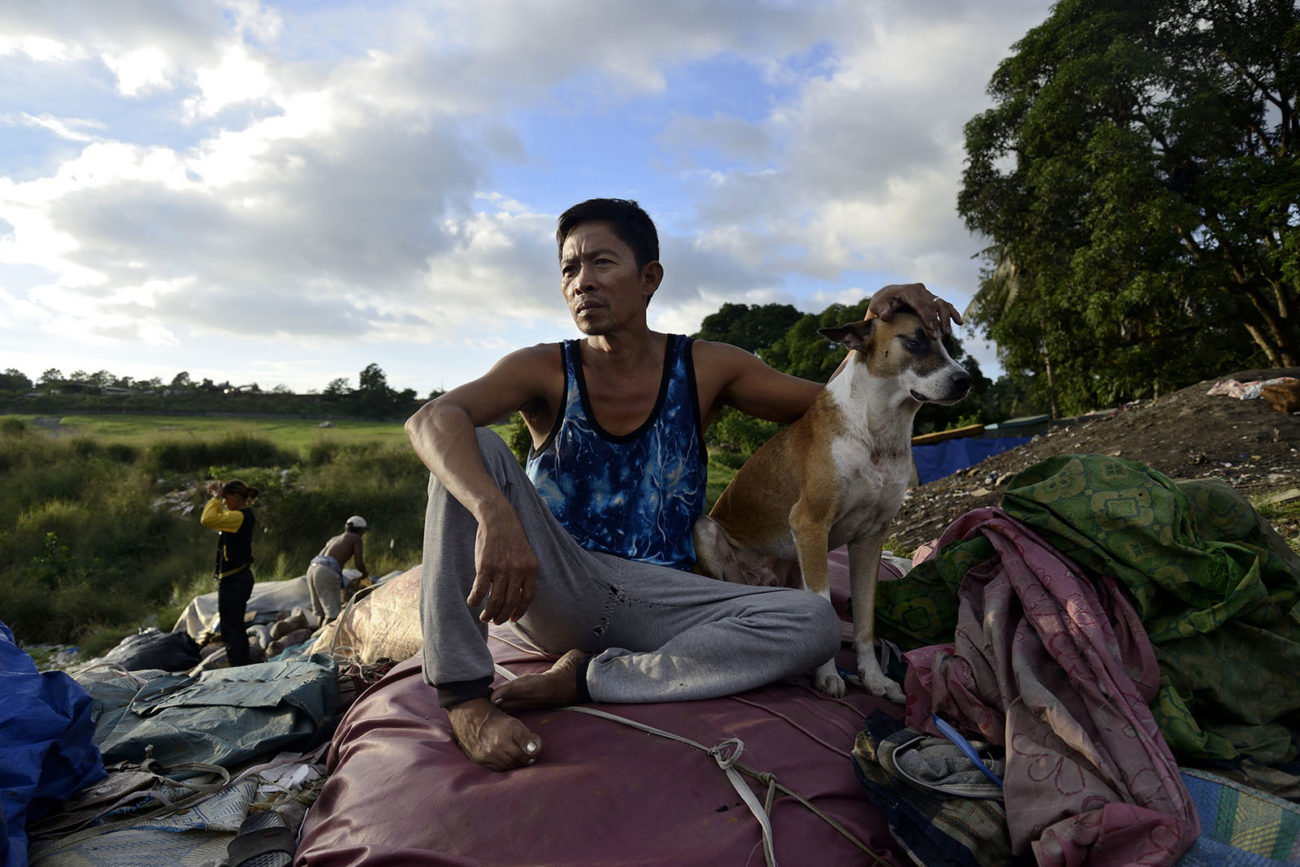 Scavengers originated in the Philippines from the 1980s. After Marco’s martial law and strict control of the countryside and its movements, poor peasants began to move to the capital Manila to seek a better life. In many ways, these farmers are a new form of urban farmers who pick the garbage instead of vegetables. They work for landlords and middlemen who support them with cash advances and then put them into debt, as they did in the rural areas they left. When the population increased, slum areas also began to appear in the outskirts of the capital. The most infamous area was Smokey Mountain, a hill in Tondo where thousands of tons of Manila’s garbage were dumped. Scavengers who lived at Smokey Mountain became a dark symbol of urban poverty, and the authorities officially closed the landfill at the end of the 1990s. Hundreds of families were now not able to support themselves and moved to the new dump site in Payatas, Quezon City in Metro Manila. The garbage in Payatas grew quickly and the landfill began to be called the new Smokey Mountain. In the middle of year 2000, the accident occurred when heavy rain created a landslide of garbage and over 300 people lost their lives and hundreds of families became homeless. Shortly thereafter, the environmental law RA 9003 was created for waste management. The law is considered by domestic as by international experts to be a good law, but the problem is rather in a weak implementation of it. Despite the terrible accident, the garbage piles in Payatas, are growing. Scavengers of all ages work intensively to sort the plastic waste that can be recycled. An entire society has been created around the garbage. Ernesto who has 6 children and lives on recovering foam rubber mattresses that are cut into pieces to become padding for pillows.

– My daughter goes to school, she is best in class, Ernesto tells proudly. 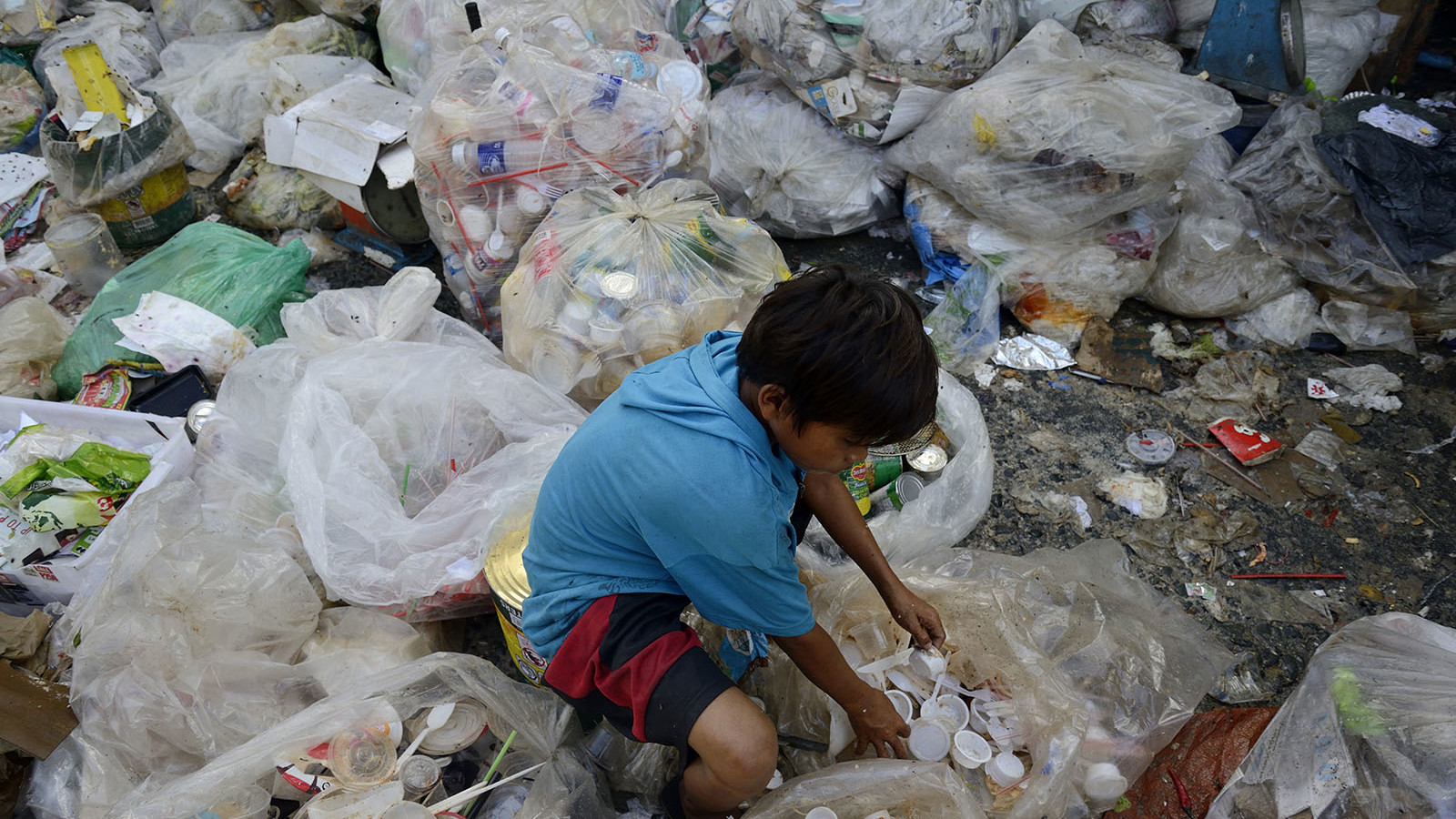 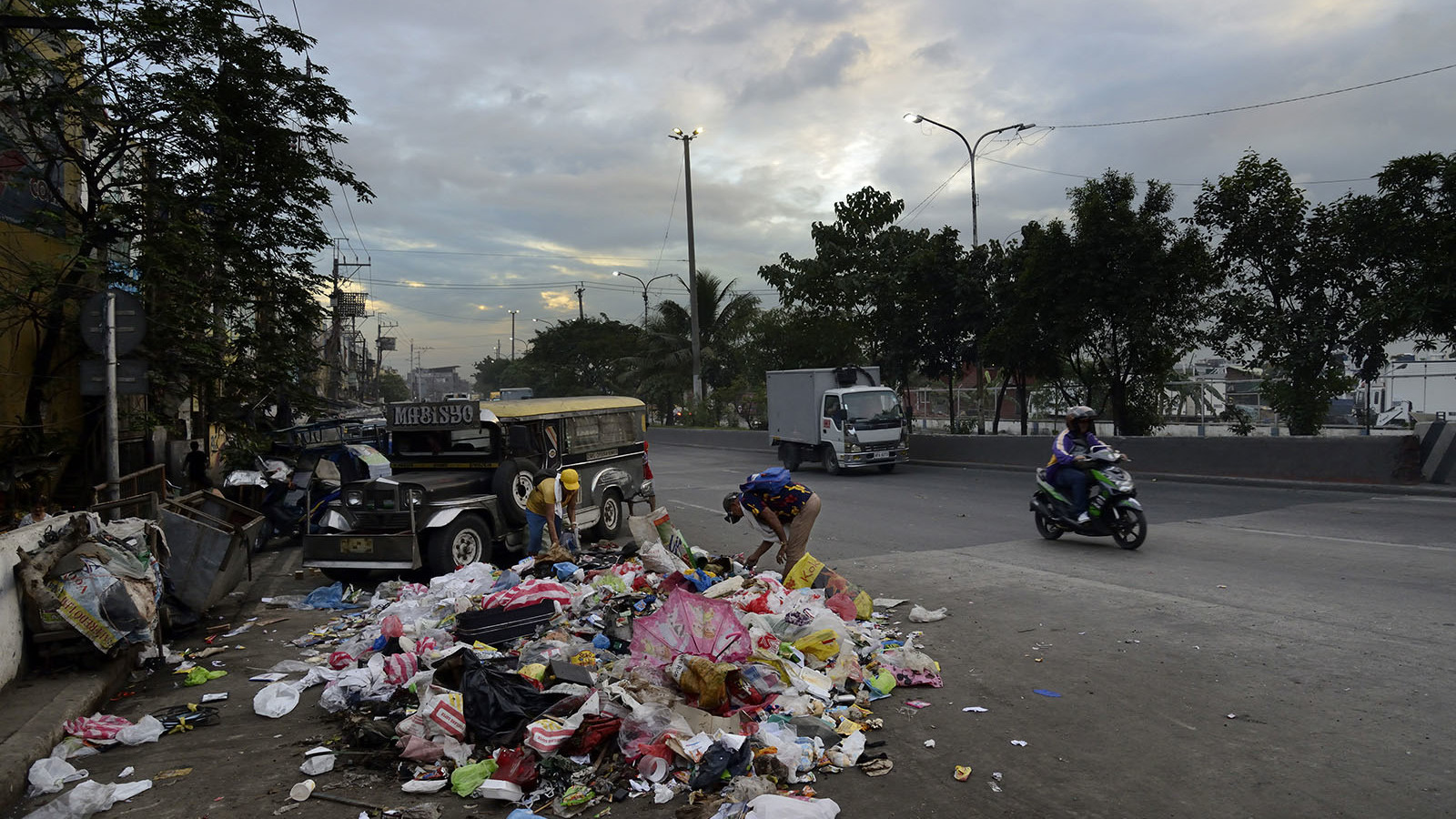 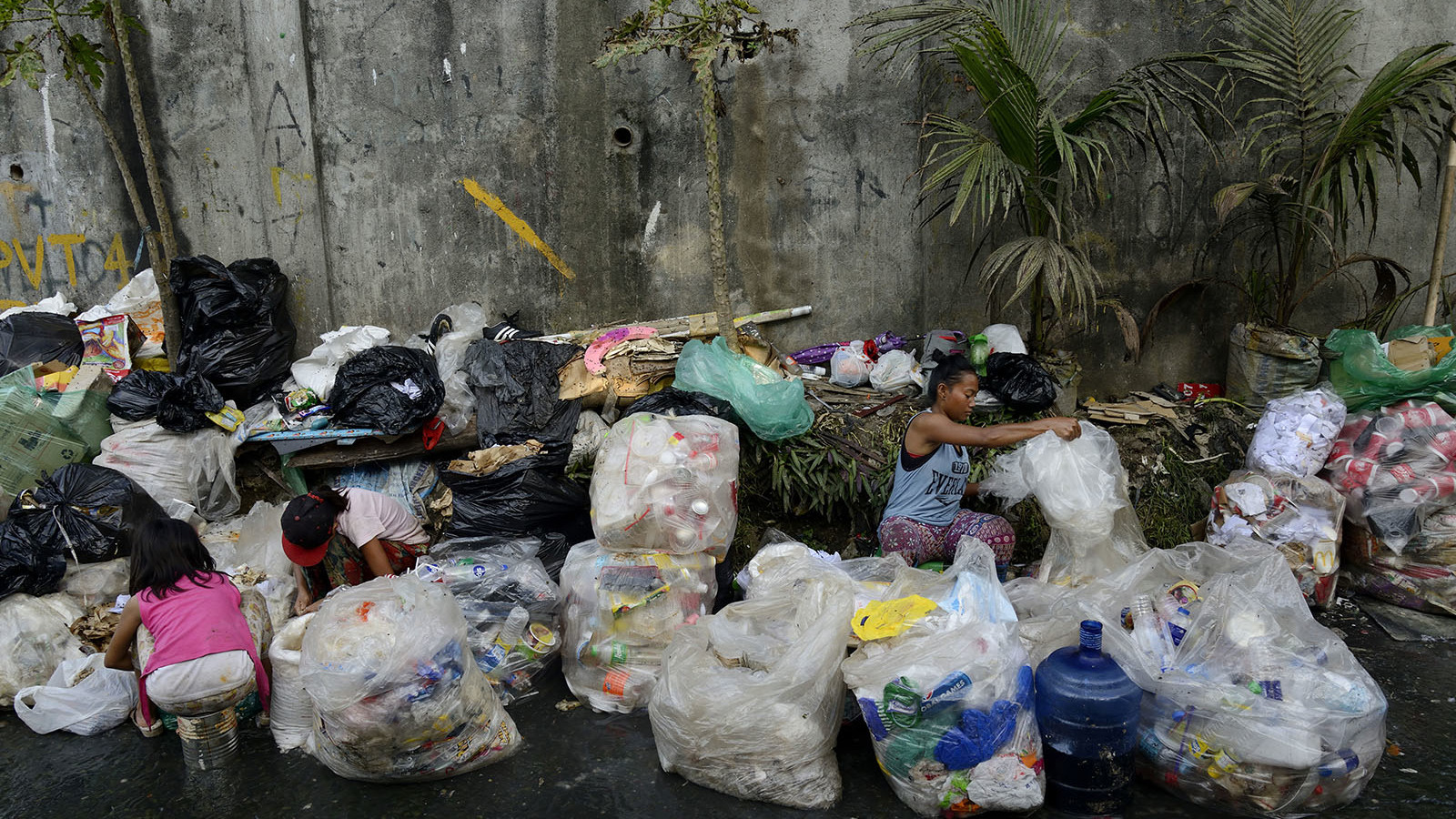 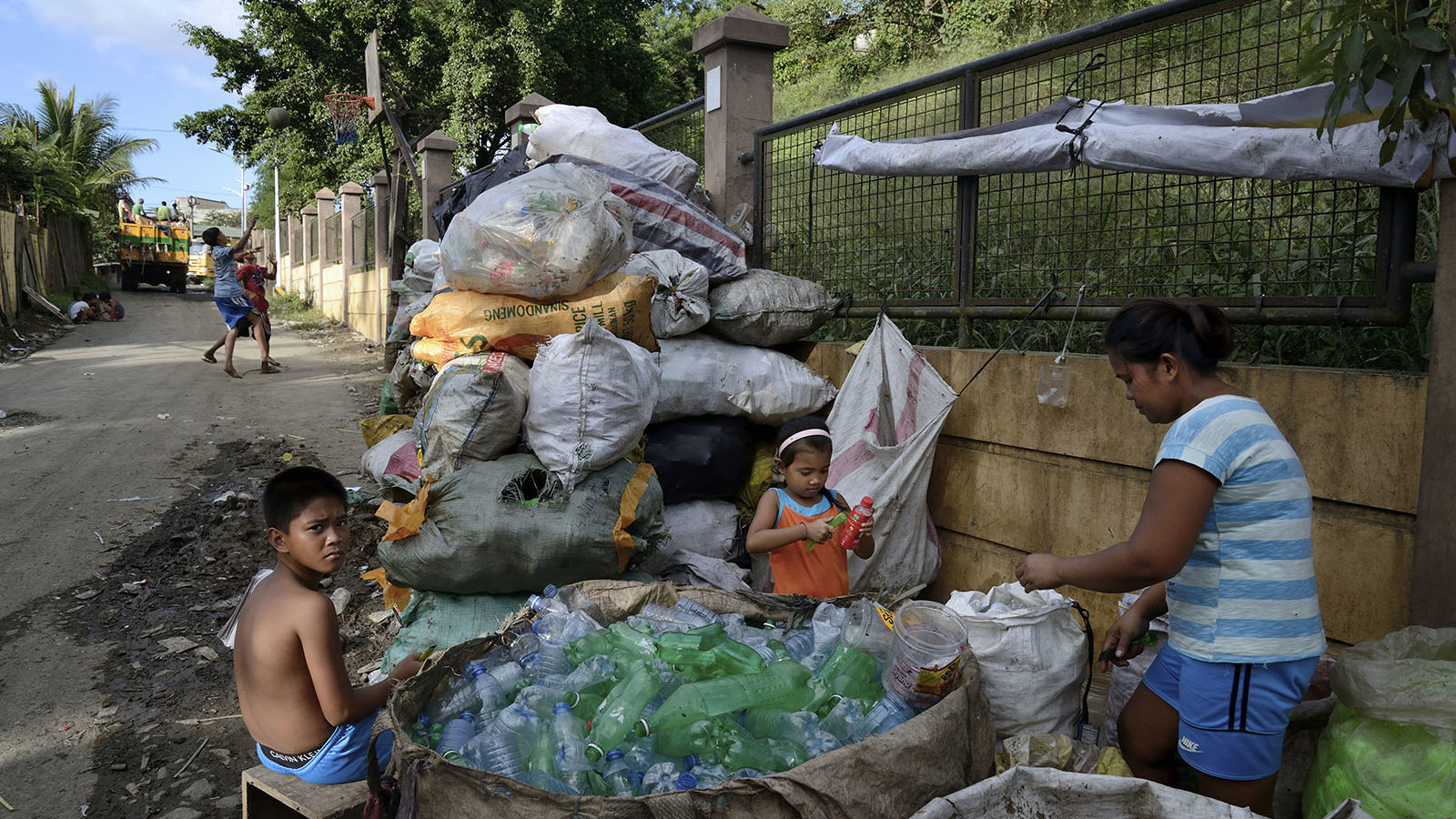 The Philippines is the third largest contributor of plastic waste in the sea after China and Indonesia. Much of this is due to the immense amount of small plastic packaging for single use that the poorer part of the population chooses against the large recyclable packaging. The biggest problem with these disposable packages is that they cannot be recycled, as well as the lack of infrastructure to handle them after use. Instead, they end up in food waste, and later on in the sea. When a quarter of the population of over 100 million people live below the poverty index, disposable packaging is not only important for large companies but extremely profitable and aggressively marketed. For those  economical weak consumers who are only offered one form of cheap packaging of soap, shampoo, toothpaste or whatever is needed in their daily life, it’s a no brainer that they choose the smaller packages for a few cents than a large package that would cost them 2 -3 day wages to pay.

A large part of the plastic garbage dumped around Tondo, flows into the so-called fishing capital Navotas, and on the whole coastline and its beaches lies the colorful plastic as a patchwork over water and sand. For those fishermen who live on a functioning ecosystem, the plastic has devastating consequences on their livelihoods. Kuja Efren who has been working in Manila Bay for over 20 years, shakes his head when he thinks about how his work has become more difficult and how he must work longer for the same amount of fish and seafood.

The Asian Development Bank conducted a study together with the Philippines’ Ministry of Environment and the Natural Resources Department. The results showed that if the Philippines continues the use single-use packaging on the current scale, the Philippines will need 200 new garbage dumps in a size like the current Metro Manila, about 600 square kilometers, already in 2020.

Several politicians in the Philippines have proposed a nationwide ban on non-degradable packaging and prohibit the import and use of disposable plastic. Such a ban would quickly overcome the problem, but it would also make life difficult for large scale of Filipinos who cannot afford to buy the big packs. The truth is that there are very few politicians who are willing to make life miserable for millions of potential voters, at least if they are thinking of being re-elected. For the thousands of scavengers making a living on the garbage, tomorrow’s global problems are not directly on their agenda. On the individual agenda, it is more about getting enough money for food. At the same time, the garbage of plastics grows rapidly along with increased economic growth in the Philippines.