It has been pouring down all week, the taxi taking me to the bus station plows through the puddles of water, resembling a trawler, rather than a car. The few people outside are running in hope of escaping the rain. The taxi driver is struggling with the fog on the front window and wipes it with a small cloth while driving amidst Yangon’s rush traffic. The Monsoon rain has hit the mining industry and a large coal mine in the Magway region was closed after it collapsed and a number of workers, along with a Chinese engineer, died.

"Myanmar has an increasing need for electricity, since at this point 6.5 million of the population still live in areas not covered by the electrical grid and the government hopes to be able to supply power to all of them by 2030." 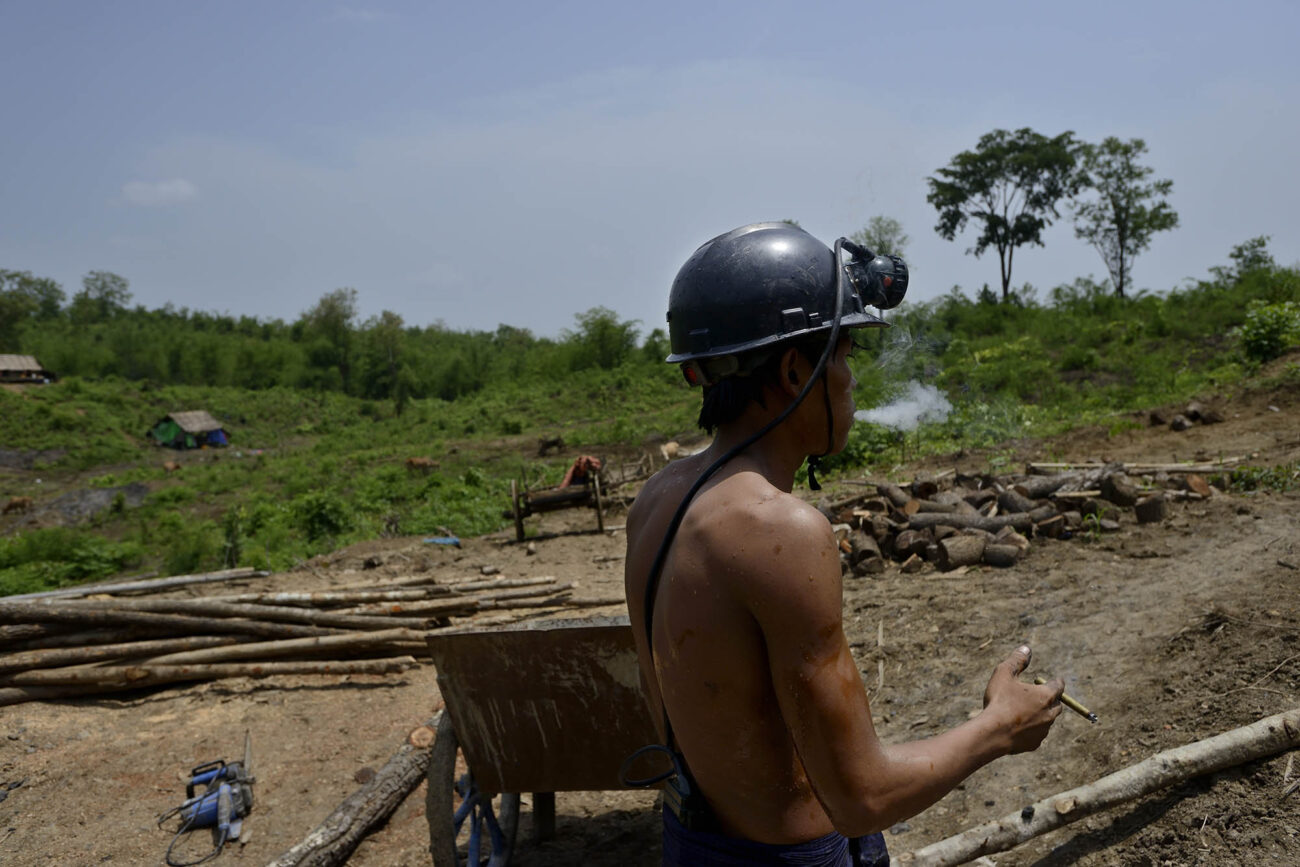 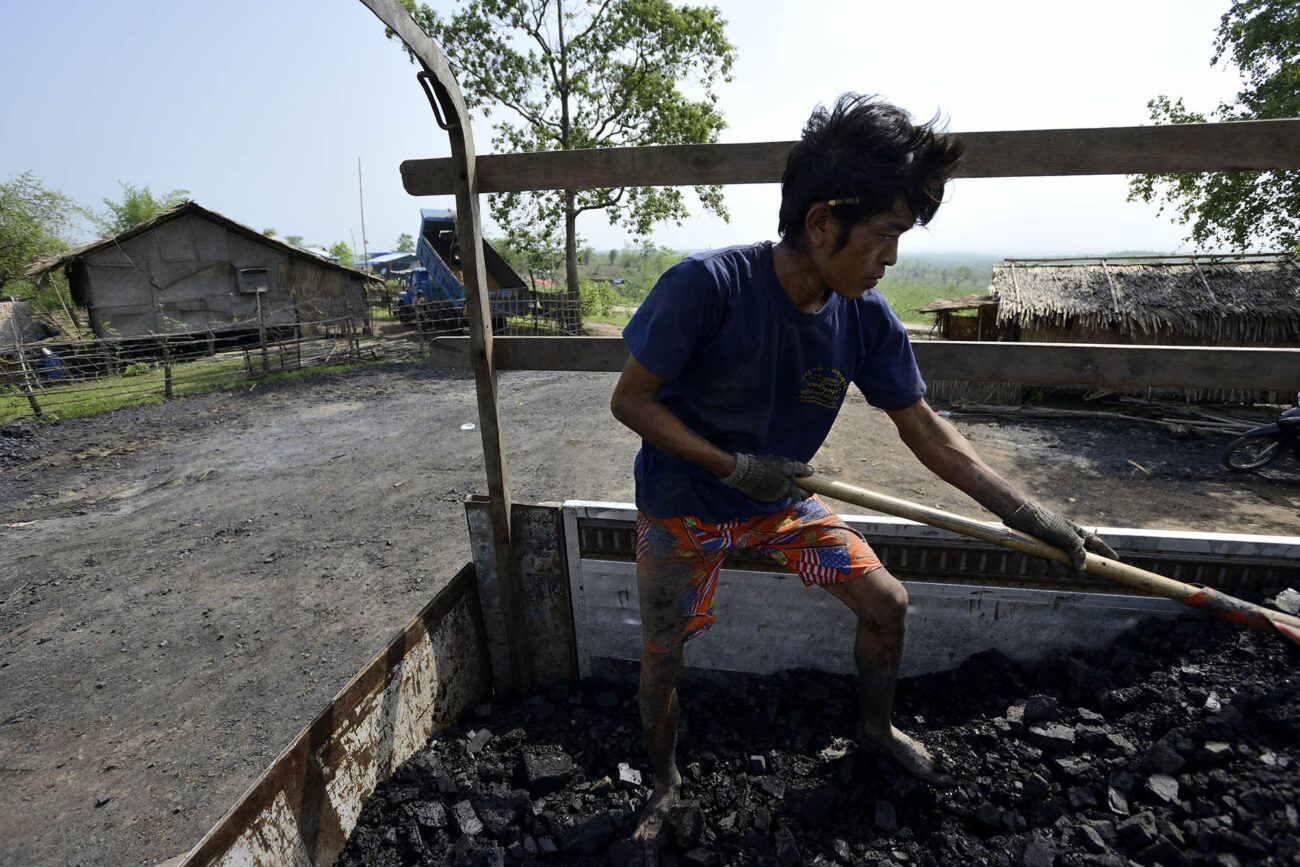 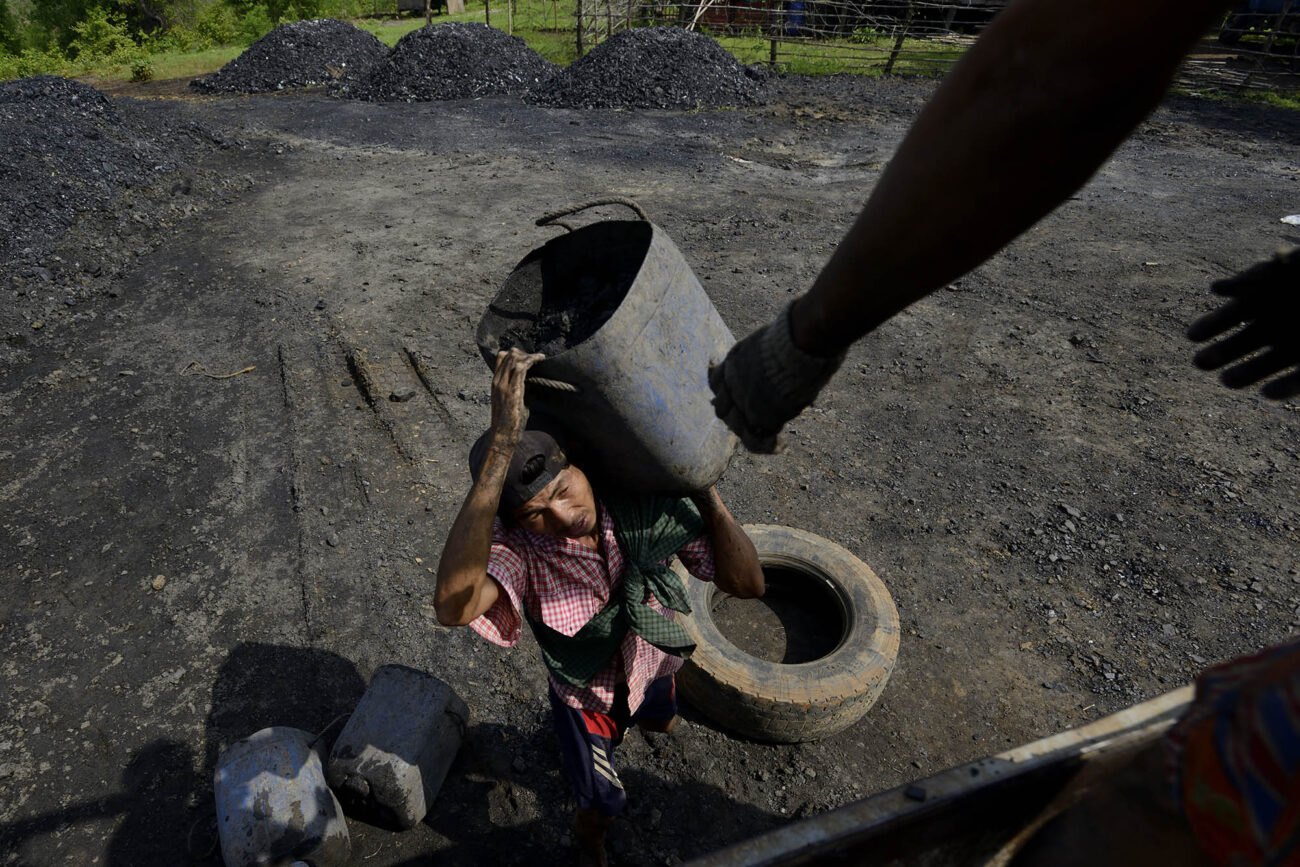 Myanmar has an increasing need for electricity, since at this point 6.5 million of the population still live in areas not covered by the electrical grid and the government hopes to be able to supply power to all of them by 2030. Coal is one of the potential sources of energy. Despite the loud warnings about the disastrous environmental consequences, the government is pushing forward with several coal power plants. The people from the neighboring villages, who are affected, protest but the government rejects all criticisms and points out that some sacrifice must be made to pace up the country’s development.

According to the reports of both the Harvard University and Greenpeace, which used an atmospheric modeling to estimate the effects of the pollutants based on the current two coal power plants, the eight plants planned for a 40-year operating life will cause about 160,000 early deaths in Myanmar. This is only half of the estimated deaths, but the remaining deaths will hit neighboring countries.

The bus trip takes almost all night and at dawn we reach the town of Minbu in the Magway region where my contact Guzu meets me. Guzu has worked for the local authorities, as well as in the oil industry and has a large network of various contacts. Minbu has a population of around thirty thousand and has only one hotel, and according to Myanmar law, any foreigner has to stay in a hotel. Once you have checked into the hotel, the staff provides a copy of the passport to the authorities, so they can keep an eye on your whereabouts. Although Myanmar has gone towards a more open society, it is still a military state with militants dressed in civilian clothes, patrolling the cities and villages, checking the ID documents of the people coming in and out of the area. 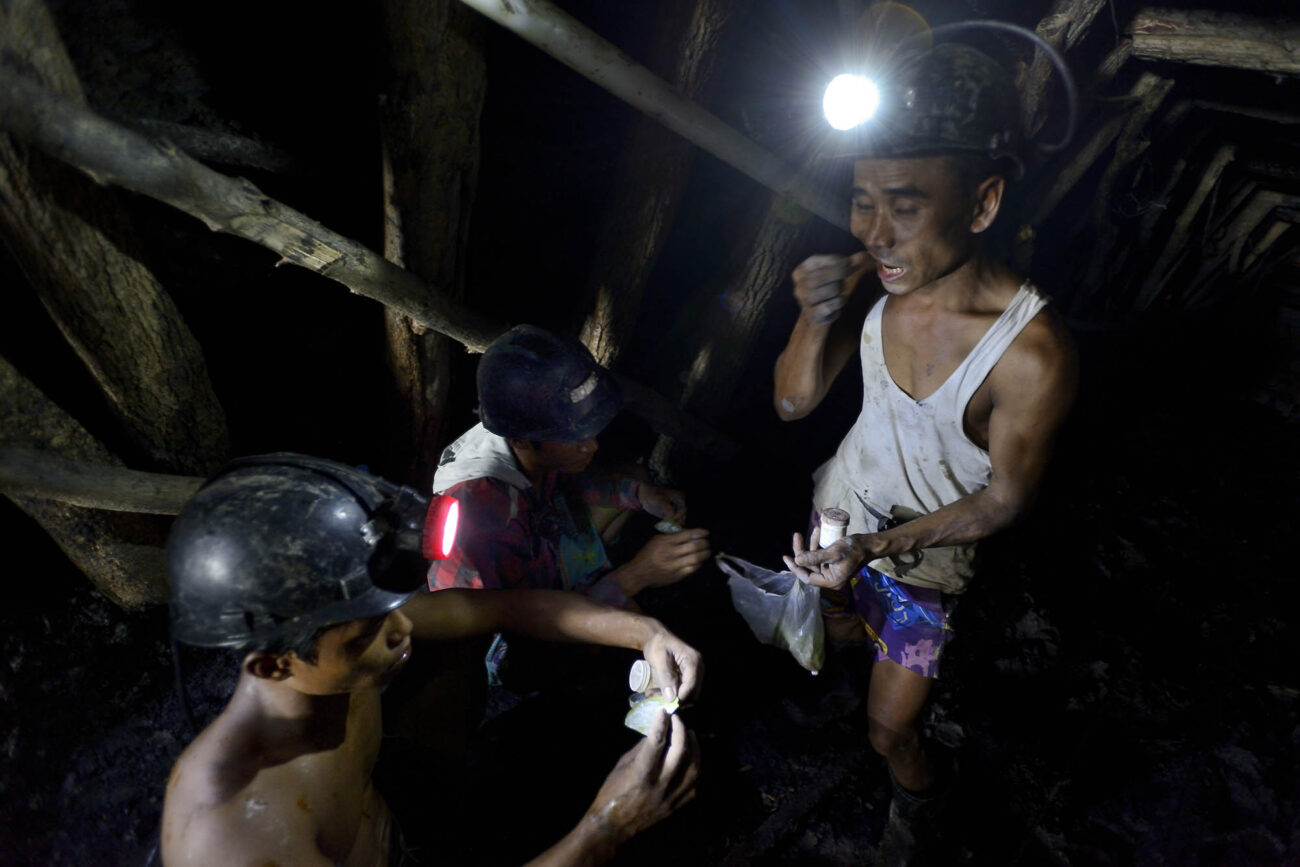 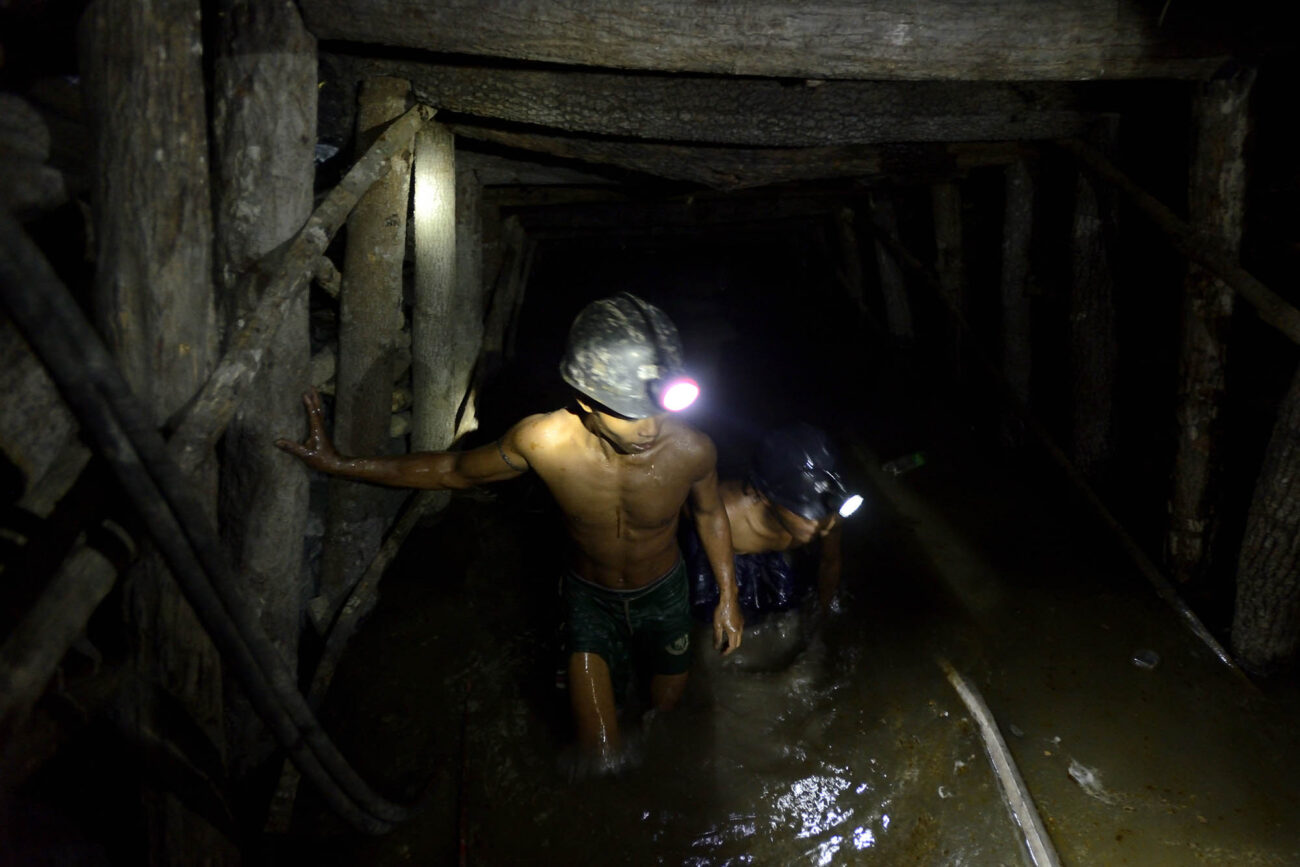 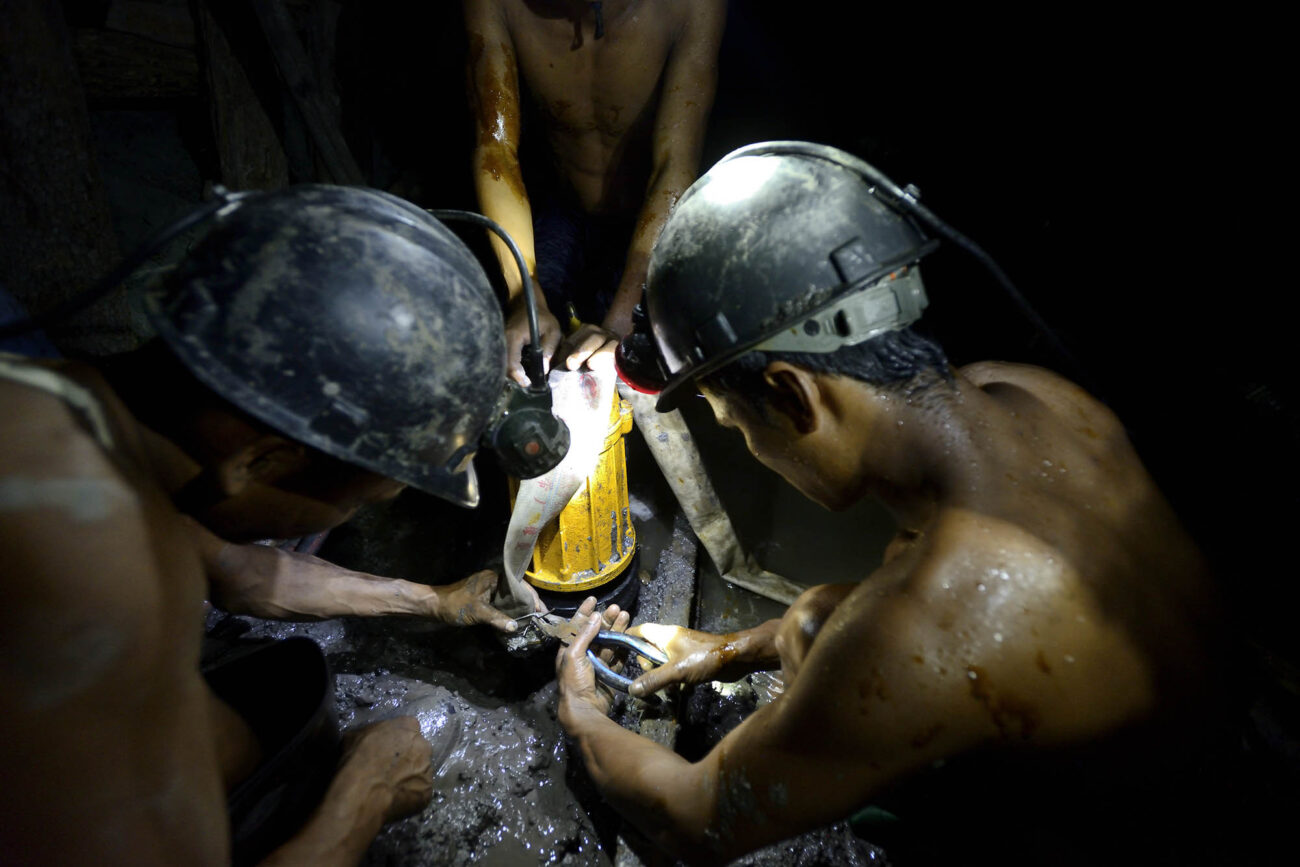 The Magway region is called the “oil pot of Myanmar” because the region produces most of the oil and natural gas of Myanmar. There are also a number of coal mines in the region. Much of Myanmar’s mining industry is driven by Chinese influence, the owners of the mines are often Chinese while the land they operate belongs to local businessmen or politicians. Corruption is also a major part of the mining industry. Government officials receive donations and then allow the mines to operate undisturbed. Problems arise when there are fatal accidents with foreign victims. This leads to some media coverage and questions, a garnish of corruption and irregularities comes up to the surface, the mining companies promise improvements and when questions are silenced, business continues as usual. 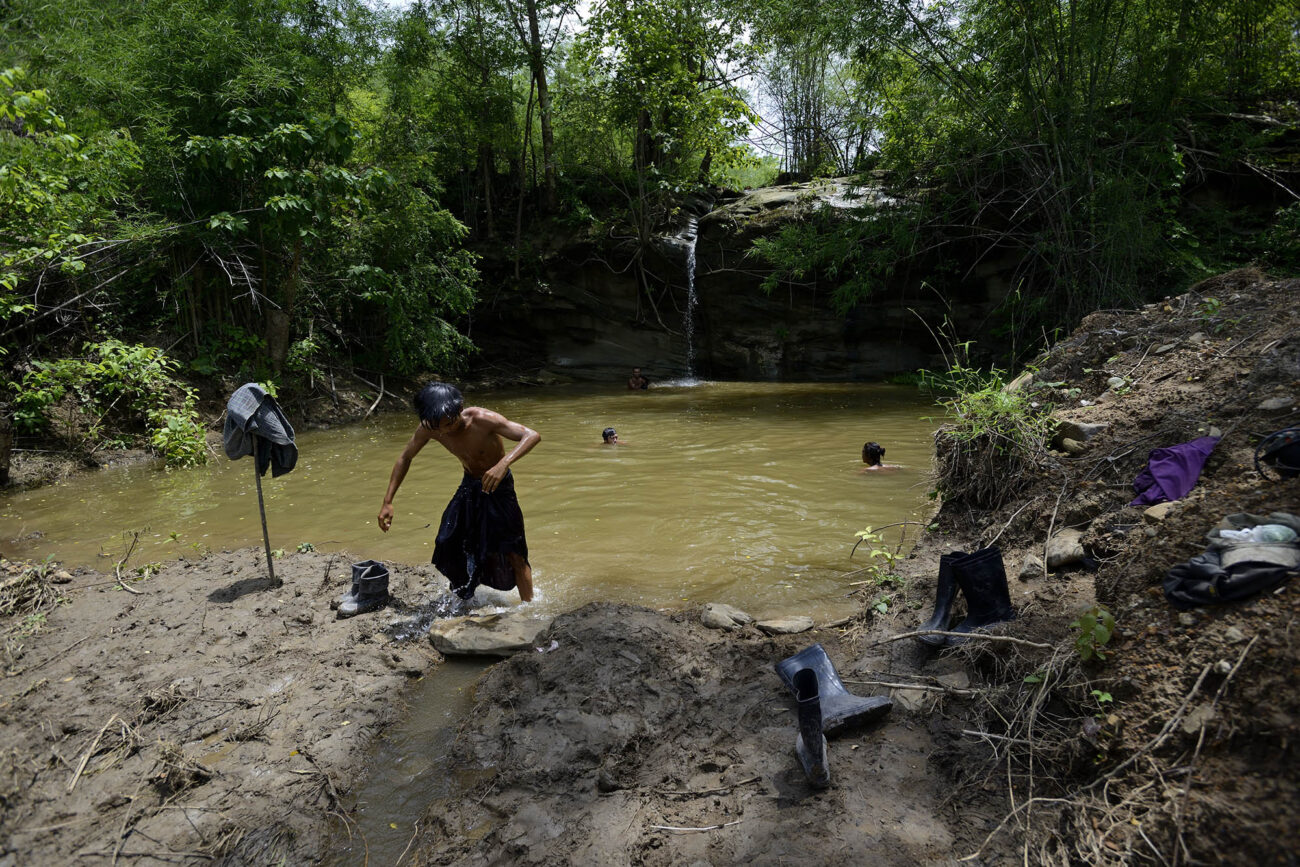 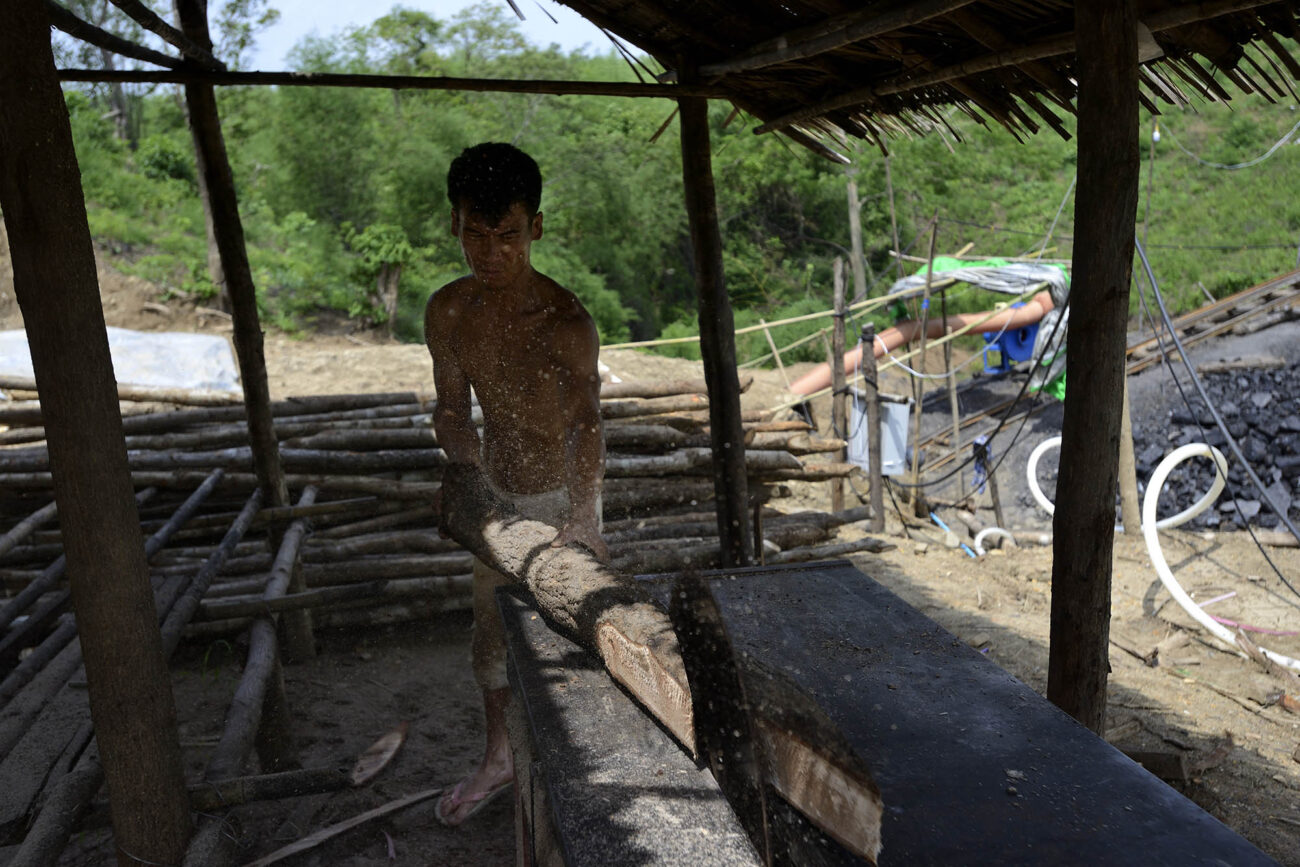 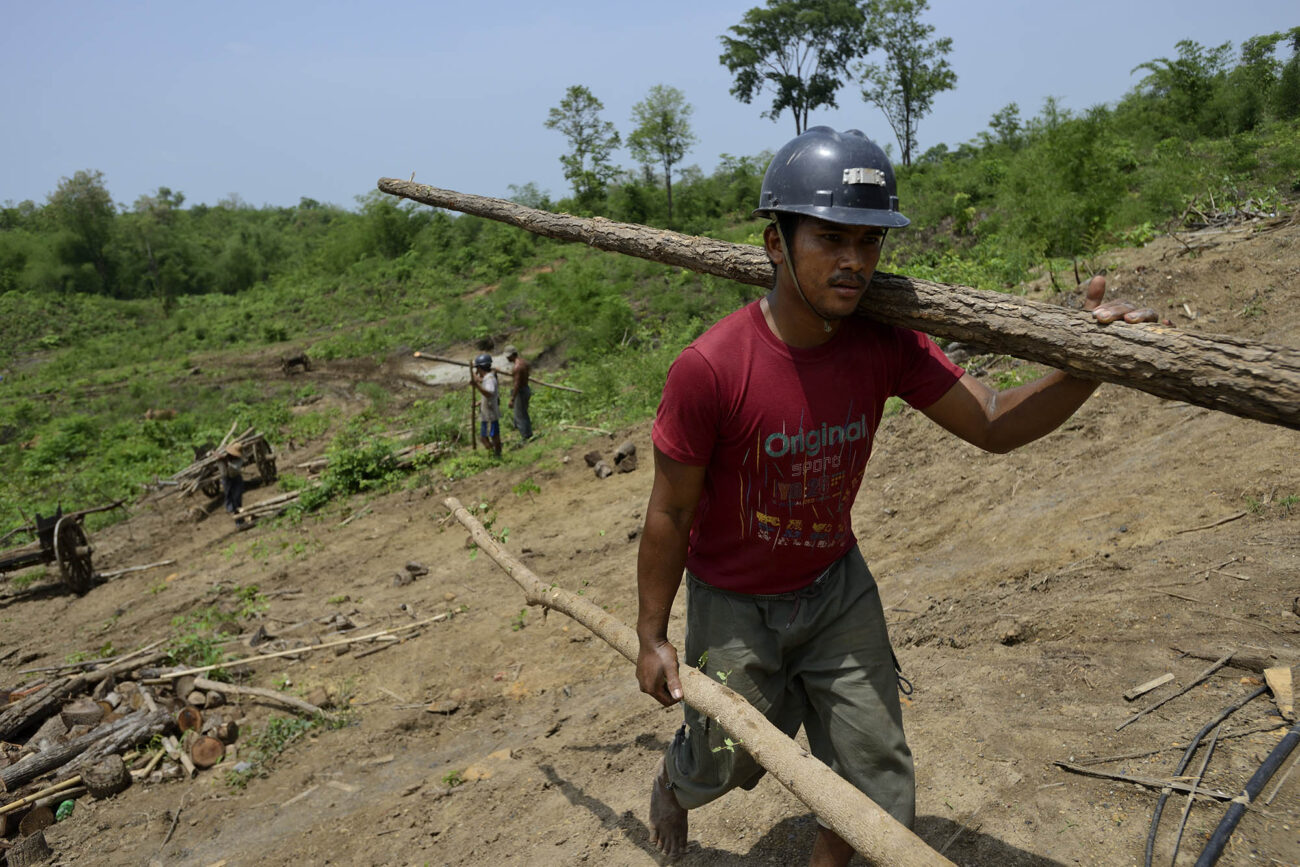 After a few hours’ drive from Mimbu Township we reach Kyught Pone, a large area where most residents either work in the oil, or in the coal sector. On the way to one of the coal mines in the area, we pass the mine’s depot, where working under the burning sun, men and women shovel the coal onto a truck. Due to all the rain that hit the area, the unpaved road has turned into a mud road and it is no longer possible to reach the mine by car. The only way to access the mine now is by motorcycle or on foot. Guzu has brought along a local politician and that’s how we get access to the mine. It takes about an hour to reach the isolated mining area. The rain has filled the mine with water and the workers are struggling to pump the water out while reinforcing the wooden beams inside the mine. Without even a light breeze in the area, the thermometer shows temperatures above 40 degrees and work is moving slowly forward.

“If you want to go into the mine, you need to swim,” says one of the miners, laughing.

From the mines opening it leans down and after 100 meters it stops because of the water masses. Some of the miners swim with a pump to move it further into the mine. Well aware of the risk of staying in the mine, miners work hard in silence. Some of the wooden beams are already starting to break and the mining engineer, whose nerves are at the breaking point, screams at the workers to work more rapidly. In many ways the mine feels like a grave, already dug up and waiting for its guests. Somebody shouts far from above – a miner is making signs for “food”. None of the miners would like to stay there for a second longer than necessary.

Outside, under the burning sun, miners jump into a small lake to cool down and wash the mud off before lunch. The dining room is located a few hundred meters up on a small hill. Rice is served accompanied by some kind of a stew. The Chinese owner is sitting alone on a table, the opposite table is occupied by local politicians, sitting and staring at each other. The truth is that they need each other, the owner brings Chinese capital together with competence and the politicians receive donations and let the mine operate under the protection of the authorities. The only thing that disturbs this beautiful symbiosis is a week of extreme rainfall.

The miners are gazing at the mine, none of them seems eager to get back down, given the mine’s current hazardous state. One of the older miners puts on his helmet and rubber boots and the others slowly start to follow him. Back down in the dark, the wooden beams are slowly breaking and the workers are trying to win time against the inevitable collapse in an industrial spirit.

When most industrialized countries turn their back to coal and invest in renewable energy, Myanmar goes the opposite direction. This is the only Asian country where they make such a large-scale venture without any emission standards. However, for the worker down there in the mine, tomorrow’s emissions are not on his personal agenda. Instead, he is focused on doing his day to day tasks, keeping his life and earning enough for the survival of his family back home.