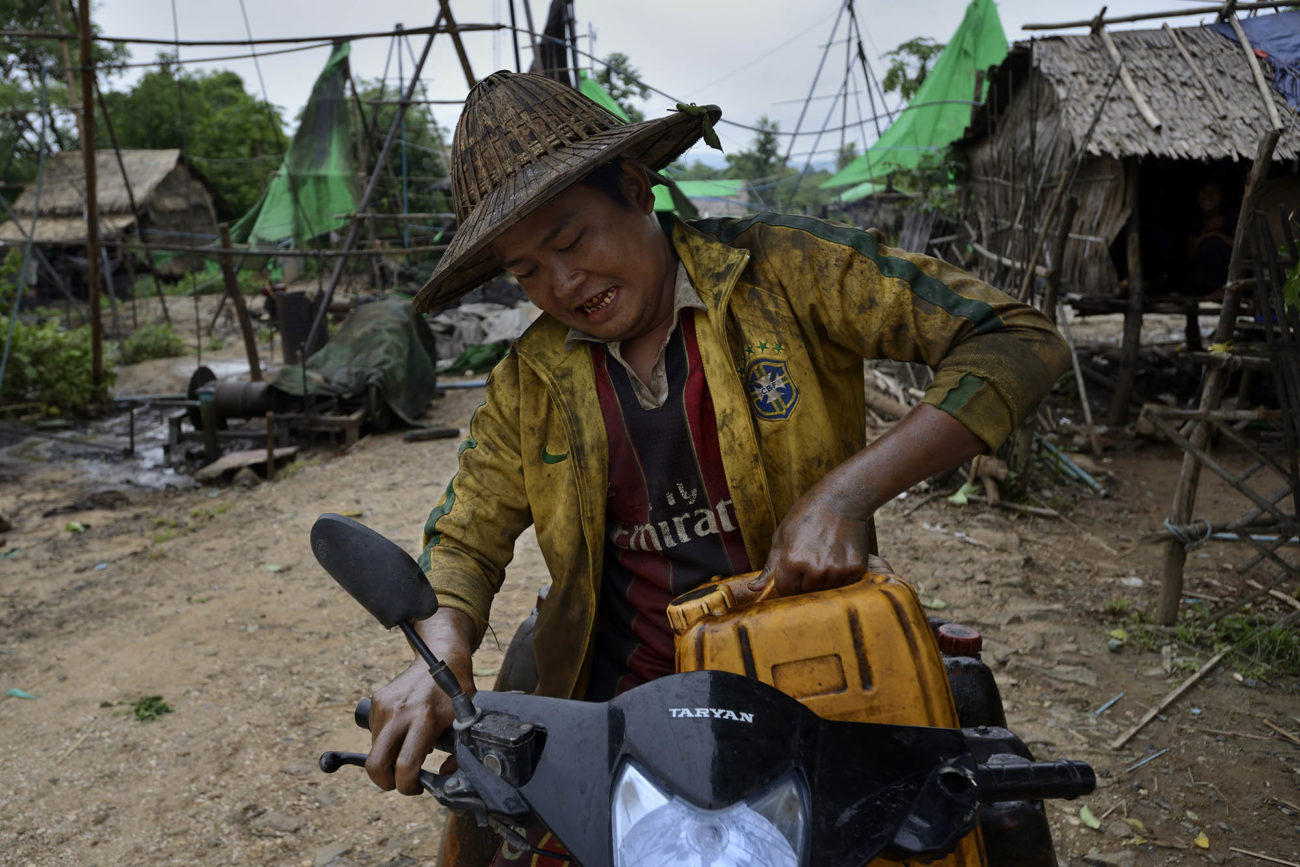 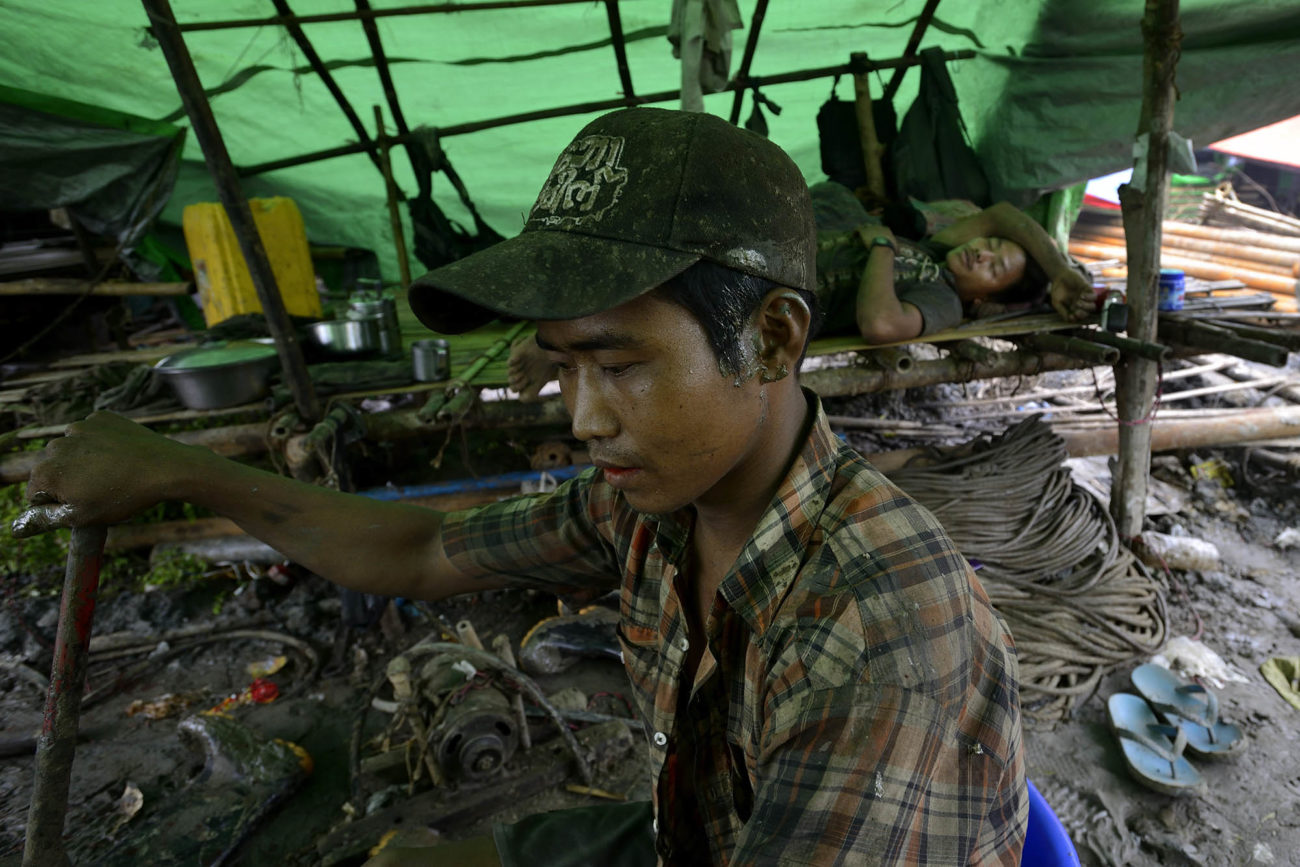 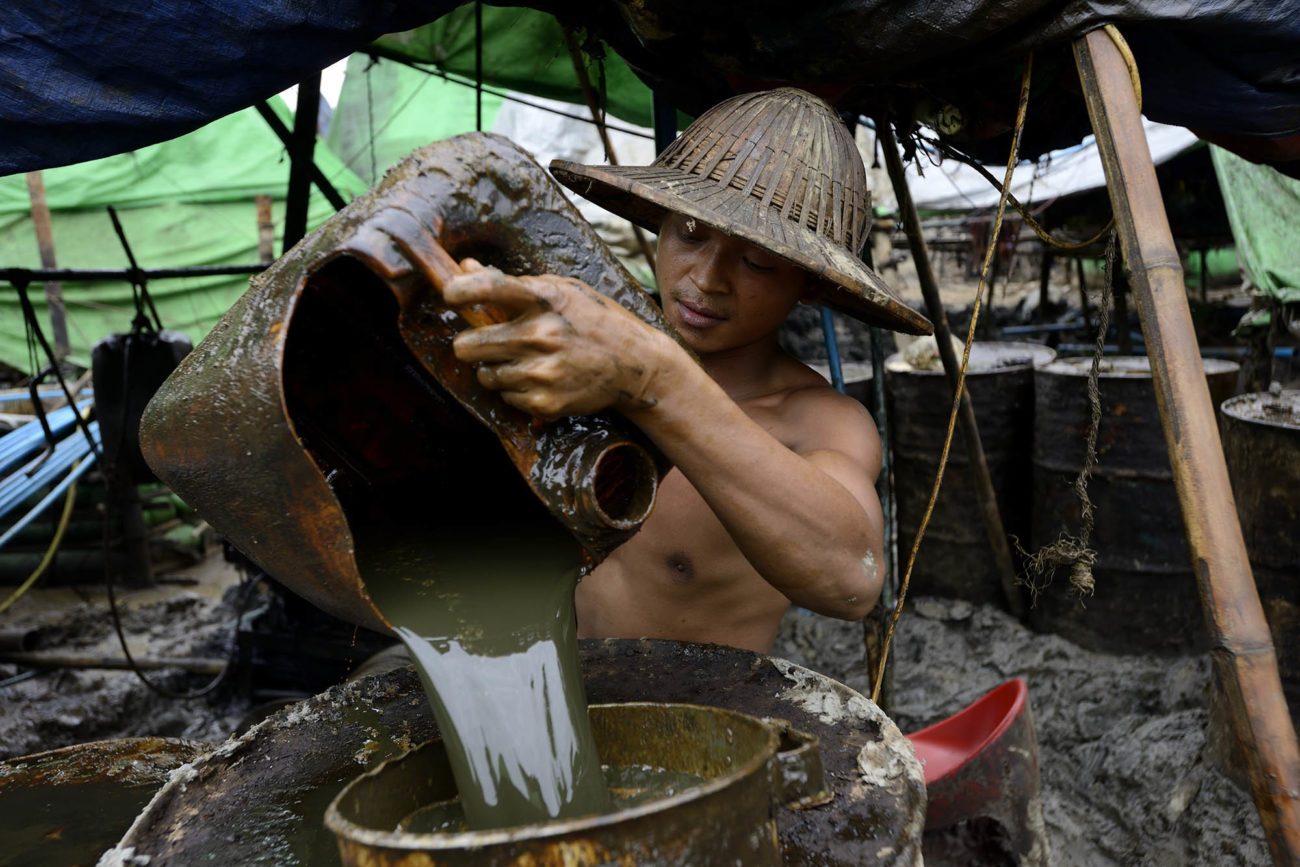 The sun stands high in the sky and as far as the eye can reach one can see small oil rigs, shining in black, sharply contrasting the green nature. A week of rain has made life hard for the thousands of workers drilling for oil in the Magway region. The area is known as the “oil pot of Myanmar” because it is the biggest producer of oil and petroleum in the country. 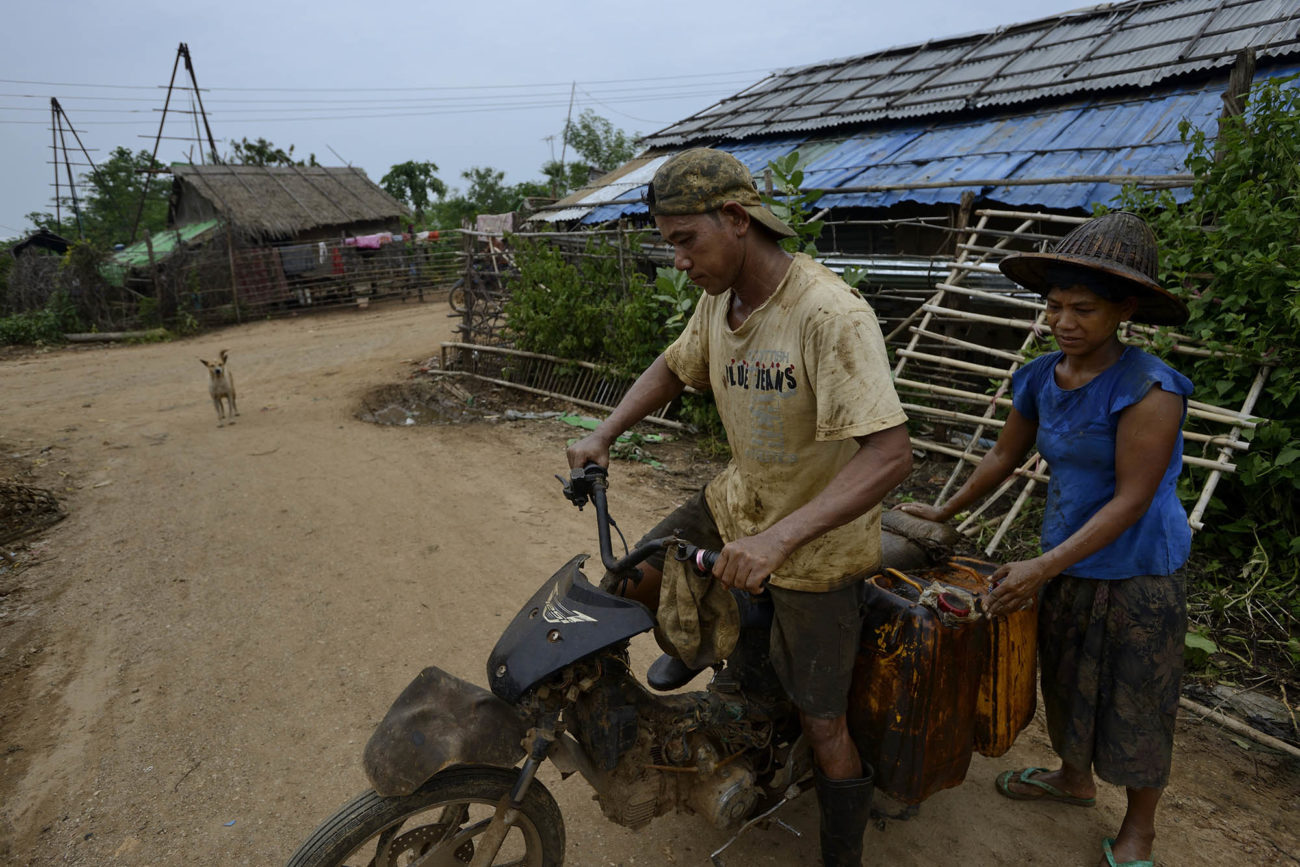 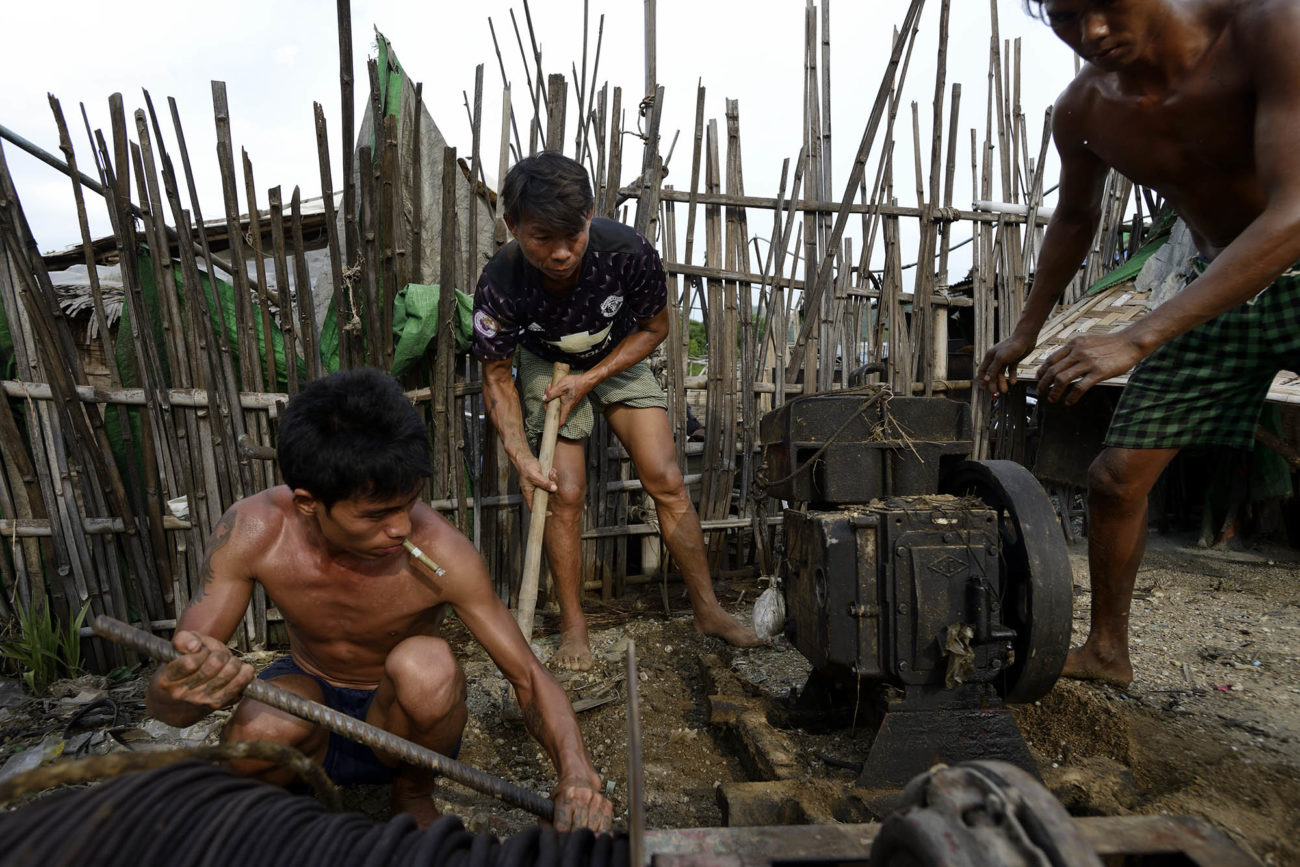 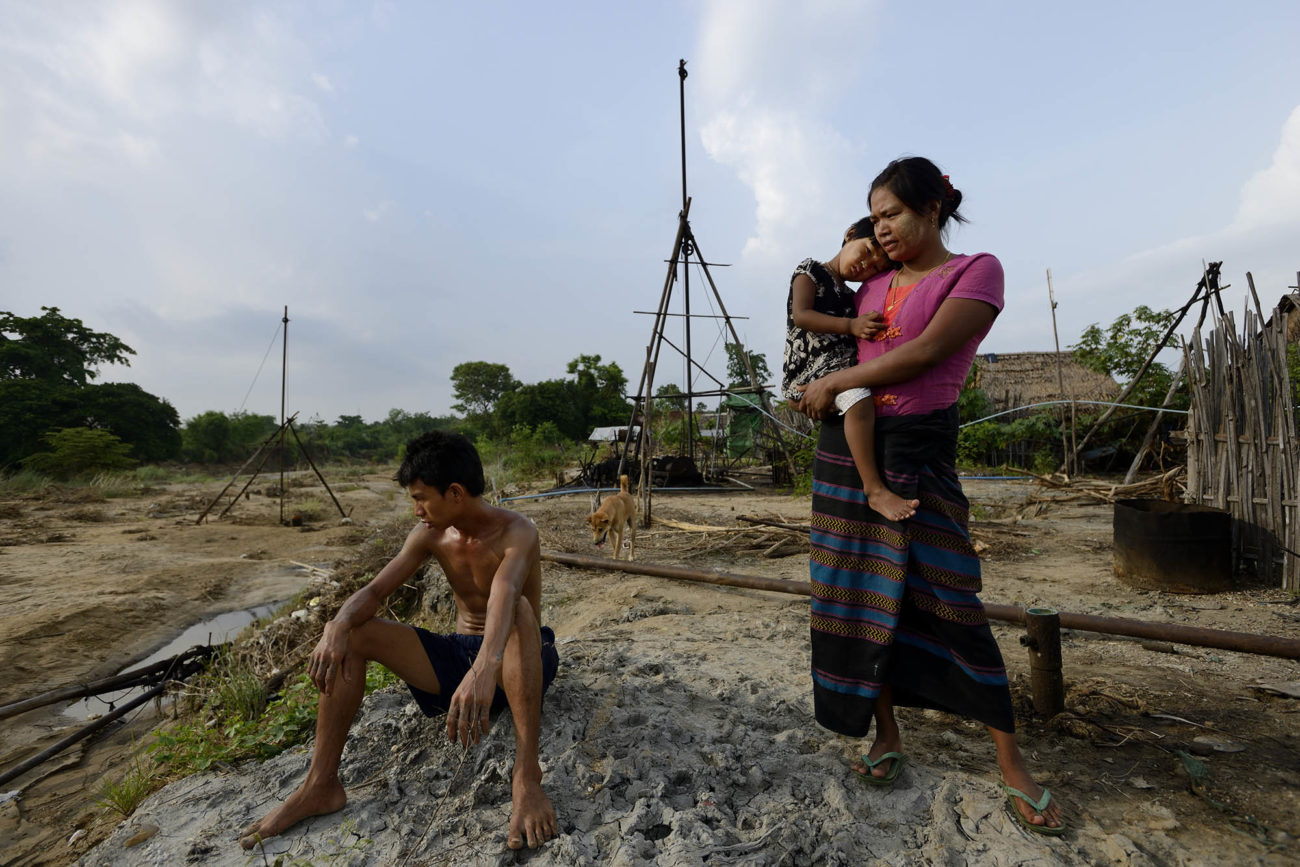 Political sanctions, one of the world’s longest civil wars and 50-year of isolation during the military regime, have hampered any foreign investments and developments in the oil industry. This has also resulted in Myanmar being one of the poorest countries in Southeast Asia, despite its abundant natural resources. After the 2010 general elections and the dissolution of the military junta, Myanmar has opened up for foreign investment. Its natural gas reserves of 1,820 billion cubic feet and crude oil reserves estimated at 139 million barrels, have been attracting oil giants such as Total, Shell, Chevron and others. However, development is progressing slowly and large companies are struggling with the high costs and risky prospecting processes.

The major oil operators are still not fully established due to infrastructural shortages, which has led to thousands of workers to keep drilling for oil in the region with almost no financial resources. Unfortunately, the same technology was used during the oil rush in the US in the 1920s. 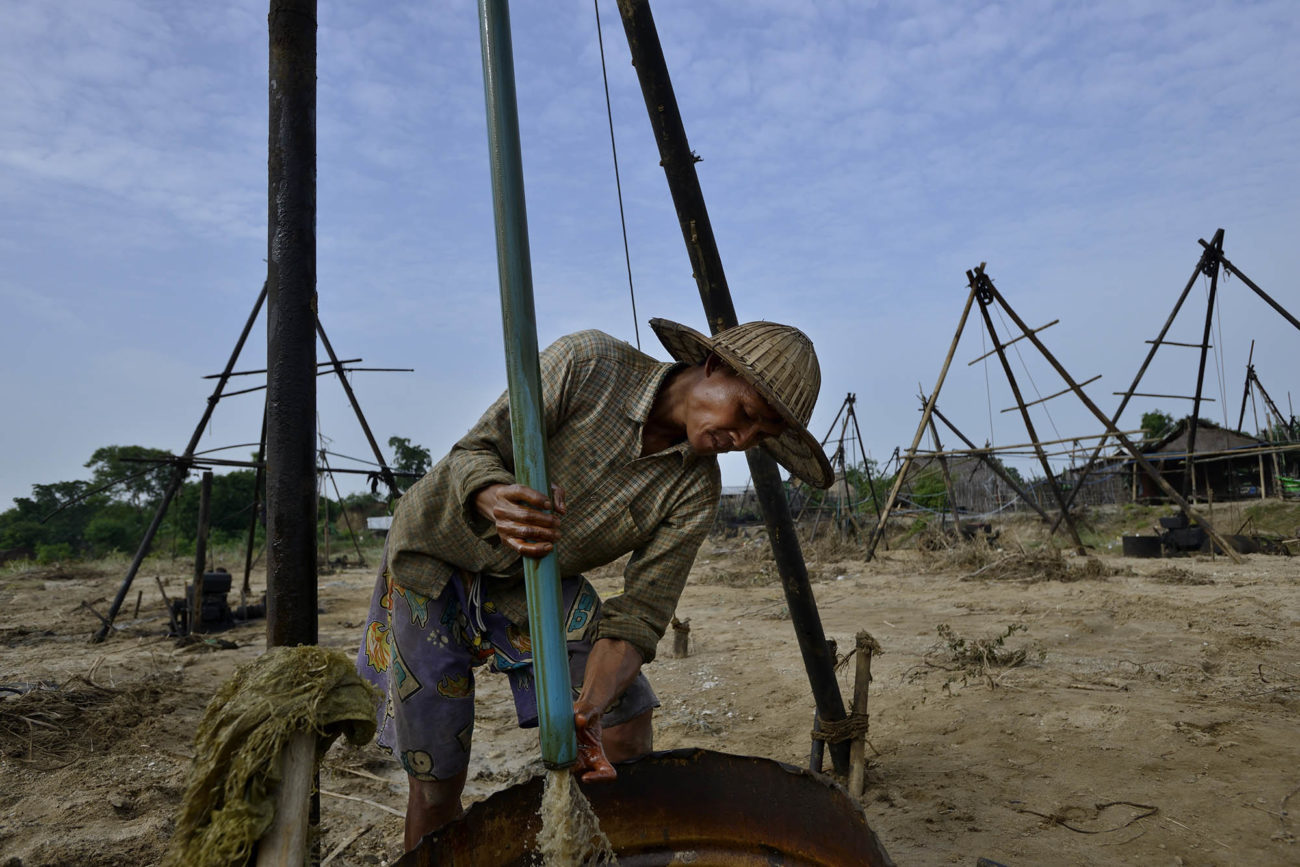 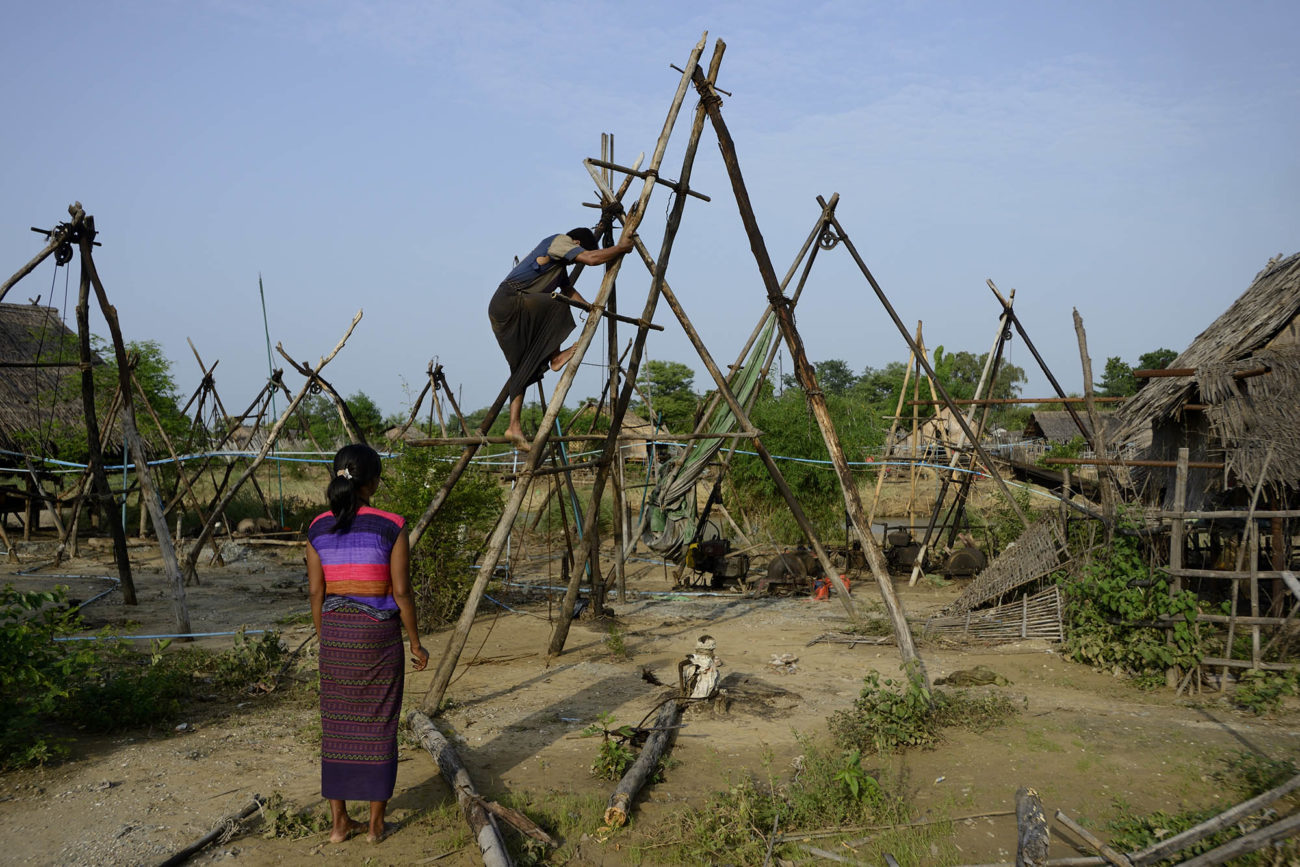 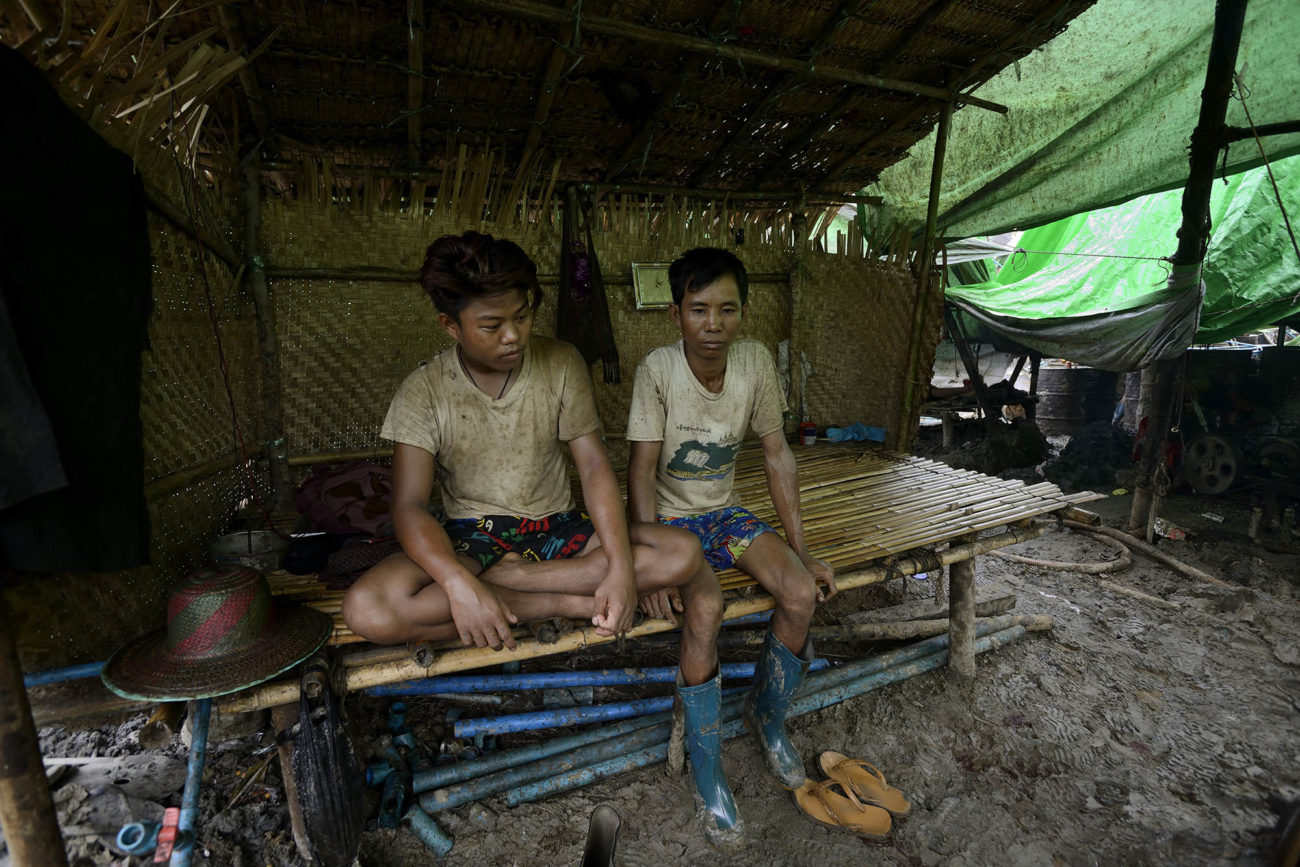 With almost no equipment provided, oil workers start drilling, at least until they can afford a generator. Bamboo poles act as rigging, a winch and a drilled hole of over a hundred meters deep allow a worker to access several barrels of oil per day. That was the reality a few years back. At present, there are more oil rigs than workers and the resources are starting to vanish.

Many of the workers have taken significant loans to purchase a piece of land, but because of the less oil available, they are currently indebted and left with a worthless plot of land. The only way for them to escape poverty is to drill in hope of finding oil.

With the oil rigs situated just a few meters apart and due to the financial strain of the workers, there are often violent conflicts between the people working on the different oil rigs. Although the profession is male-dominated, there are some female workers in the fields as well, it is not uncommon for a husband and wife to work together. Some workers join a collective formation and then share the profits from a dozen rigs. 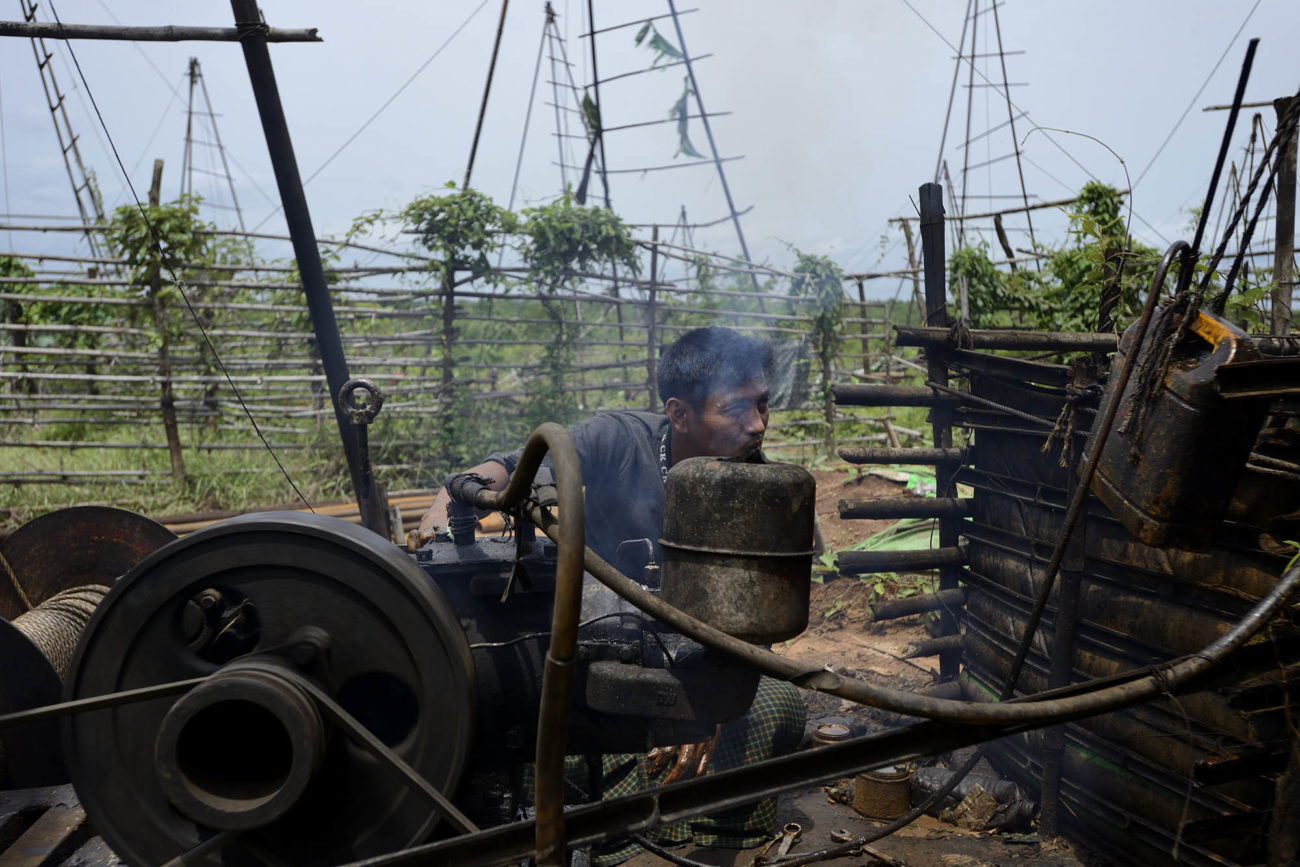 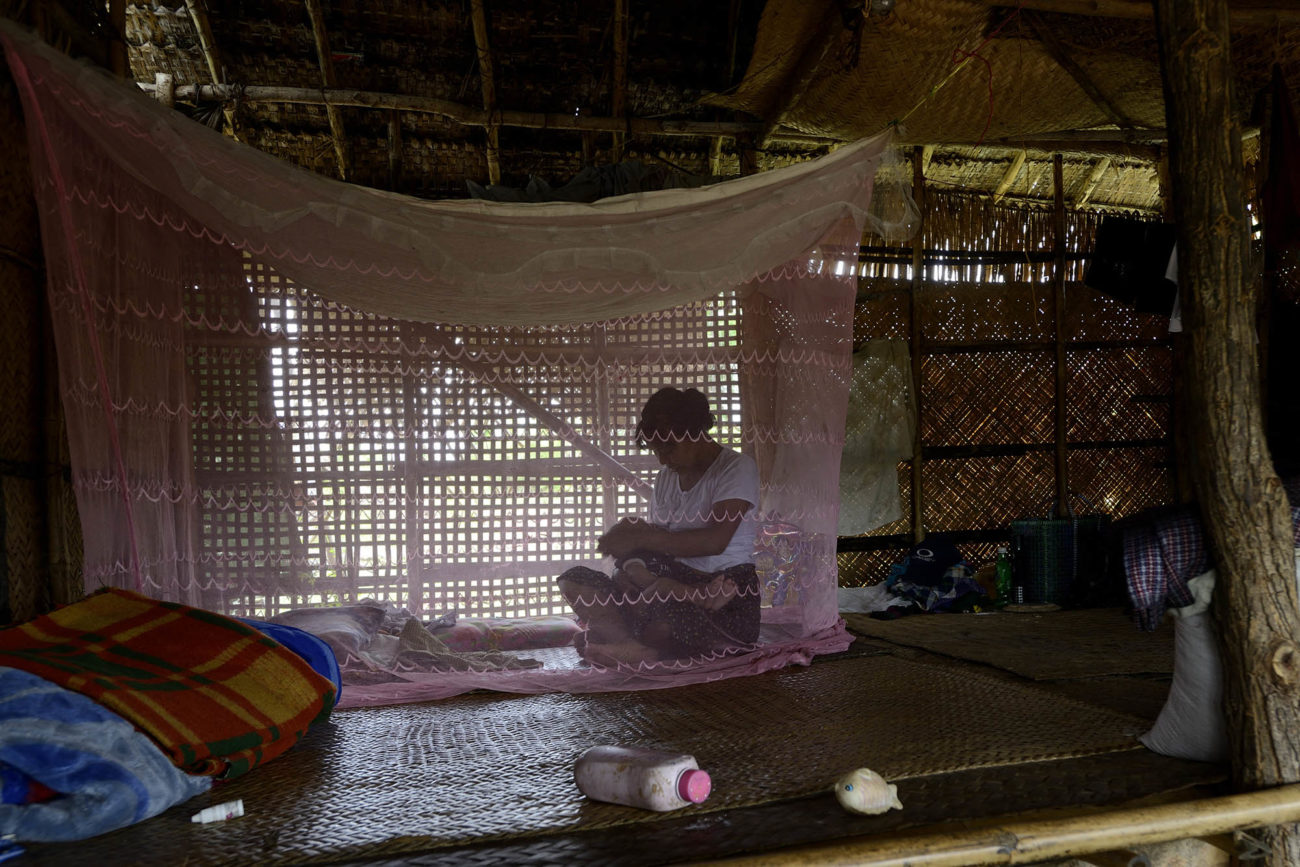 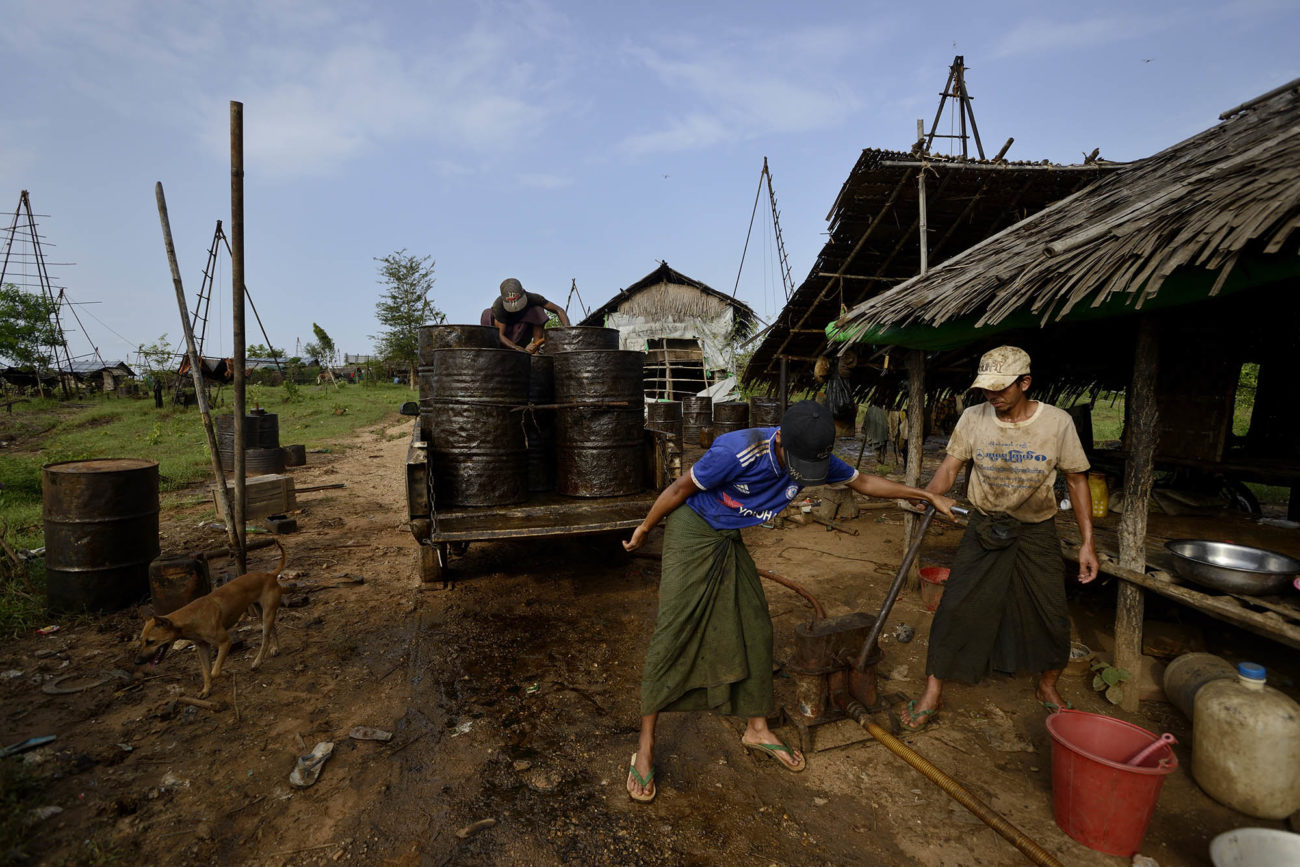 Aung Kyan San has been engaged in the oil industry for more than ten years now. Initially he took a loan of 6000 US dollars and in a few months he had not only repaid the loan but instead he had doubled the stake. Aung bought more land and hired some workers. But the rumor of hidden wealth spread quickly and more and more people started drilling in the area. At present, Aung is able to get 1-2 buckets of oil per day. A full bucket is sold for 4-5 US dollars. Having a newborn

son, Aung has other plans for making a living and has started studying gemology and showed us a small ruby he carried in a piece of cloth.

“I have to think about the future, look around the field! There are too many people drilling in search of the same resource, Aung says while tickling his newborn on his head.

Most people in the oilfields work in the morning, then rest throughout the hottest part of the day and continue in the evening when it is cooler. Since none of the workers has the equipment to check where oil may be found, they all drill counting on pure luck, it takes them several days to drill a hole manually and if there is no oil they continue to drill elsewhere. To operate an oil rig, licenses must be purchased at widely varied prices and facing large-spread corruption among the officials. Many workers choose to ignore the law and drill without a license.

The oil rig of Khin Maung Nyurt has been destroyed in the storm that passed through the village of Htan Kine. Together with his wife and nephew, he is building a new oil rig.

“I worked as a fisherman and a farmer before, but after the Nagis typhoon so much was destroyed, that it was difficult to continue and I started drilling for oil,” he says as he spins a rope around the bamboo poles on the oil rig.

For many days no one has been able to work in the village, Buddhist monks from a temple close by visit the village to provide spiritual support. For those whose oil rigs were located near the river, the large amount of water destroyed everything and the drilled holes disappeared in the sand.

“I have been looking since yesterday,” says a man, while he desperately digs in the sand.

Some of the younger play chinlone, a traditional sport where you kick a handmade football. Others got their generators started and they rumble amidst the idyllic nature. Large amounts of oil flow into the river, creating rainbow-colored rings in the otherwise clear waters. Despite the obvious reasons, it’s not uncommon for workers to smoke cheroots – a local loosely packed cigar while they work on their oil rigs.

In 2017, Myanmar Investment Commission issued a permission for the construction of offshore supply bases. When the large multinational companies expand in Myanmar, local oil workers will be pretty quickly left without any income, it is unlikely that anyone will protect their interest in the energy-expanding Myanmar. In anticipation of tomorrow’s hardships and the expansion of the oil giants, the small workers will continue to drill and search for oil, at least as long as someone is willing to pay for their few buckets of oil.